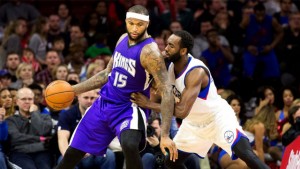 DeMarcus Cousins averaged 24.1 points and 12.7 rebounds per game this past season.

The Los Angeles Lakers apparently want to swing a trade for All-Star center DeMarcus Cousins, but can they persuade the Sacramento Kings to deal away their best player?

Marc Stein of ESPN reports that sources say the Lakers, Kings and Orlando Magic have discussed a three-way trade that would bring Cousins to LA. However, the Kings are saying they have no intention of trading Cousins.

General manager Vlade Divac recently told the Sacramento Bee: “That is not happening.” And Kings owner Vivek Ranadive, reacting to the ESPN report, told USA Today Sports: “We have zero interest in moving Cousins, so I don’t know where that’s coming from.”

According to the report, Karl has been trying to sway Divac and other players to his side, in a bid to convince Ranadive that Cousins has to go. Ranadive, a vocal supporter of Cousins, is said to be becoming irritated with Karl’s pushing.

Whatever the public stance of the Kings may be, such a three-team trade likely would involve a first-round draft pick. All three clubs are picking in the top six. And in this scenario, the Magic could move their young center, Nikola Vucevic, to Sacramento as a replacement for Cousins.

What do the Lakers have that could interest these potential trade partners?

Stein writes that forward Julius Randle, their No. 1 draft pick last year who lost his rookie season to a broken leg in the team’s opening game, guard Jordan Clarkson and their draft selection at No. 2 could stir the Kings and/or Magic. However, since the Lakers already have traded 2016’s first-round pick and NBA rules prohibit dealing away such picks in consecutive years, they would have to officially make their selection before any trade.

The Lakers aren’t the only ones who would like to add Cousins, who has three years left on his contract. The Boston Celtics and Denver Nuggets also have been rumored as possible new homes for him.