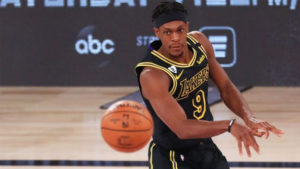 Rajon Rondo has said he will opt out of his $2.7 million contract for next season (he has a player option) and will test the free agent market. The Clippers are looking for a playmaking point guard to help diversify their offense next season.

Does that make a match? The Clippers will pursue Rondo, reports Marc Stein of ESPN, although the Lakers will try to bring Rondo back.

Rondo was solid for the Lakers coming off the bench during last regular season, and it wasn’t so much the 7.1 points or five assists a game he gave them, it was quality minutes running the offense and keeping it flowing when LeBron James rested.

In the playoffs, Rondo stepped up on and off the court. In the closeout Game 6 of the NBA Finals, Rondo had 19 points on 8-of-11 shooting, he finished 5-of-6 shots at the rim and — making the Heat pay for their “let Rondo shoot” defensive strategy — hit three of four from beyond the arc. Rondo shot 40% from three in the playoffs. Off the court, it was Rondo who spoke up at a Lakers’ team meeting between games 5 and 6 of the Finals and was adamant they would win the title with defense, not just scoring.

The Clippers could use all of that, but they need to go into this with their eyes wide open about Rondo’s lack of shooting and inconsistent (to be kind) defense. They would not be getting him for the regular season.

The Clippers also have been linked to Goran Dragic, who would be a good fit if healthy (but expensive to pry away from Miami). Beyond that, overall, this is a thin crop of free agent point guards. The Clippers can’t afford Fred VanVleet, and after Dragic and Rondo it drops off to players such as DJ Augustin and De’Anthony Melton.

The Clippers could use part of their mid-level exception to chase Rondo, but will they put enough in that the Lakers would not match or better that number? Would Rondo go to whichever team pays the most, or are there other considerations between the franchises that would impact his decision?