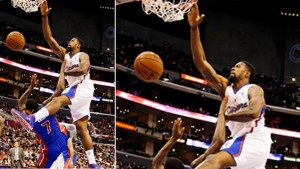 Los Angeles, USA — Los Angeles Clippers center DeAndre Jordan has split with his representatives at Relativity Media, Dan Fegan and Jarinn Akana, according to a report by the Los Angeles Times.

Jordan told the agents of his decision a few days after the NBA fined the Clippers $250,000 for violating league rules while trying to re-sign him last month, the LA Times reports.

A league investigation found that the Clippers had made a presentation to Jordan, who was then a free agent, on July 2 that improperly included a potential third-party endorsement opportunity. League rules prohibit teams from arranging for others to provide compensation for a player unless it is included in a contract or is otherwise permitted by the collective bargaining agreement.

Jordan, after verbally agreeing to a four-year max deal with the Dallas Mavericks during the free-agency moratorium period, made an about-face when he re-signed with Los Angeles.

Before the signing became official, a Clippers contingent that included coach/team president Doc Rivers, owner Steve Ballmer and star teammates Chris Paul and Blake Griffin had descended en masse on Houston to get Jordan back, meeting him at his house.

Several of the Clippers contingent remained after the end of the meeting, staying until he was to sign the deal, which Jordan was first able to do at 12:01 am ET when a league-wide moratorium was lifted.

Fegan and Akana had arrived in Houston the same day as the LA contingent — along with Mavs owner Mark Cuban and lead Dallas recruiter Chandler Parsons — but were excluded from the Clippers’ early-evening meeting with their client, according to ESPN sources. Akana was, however, present during the signing.

Relativity Sports marks the third agency Jordan has left in seven seasons; Joel Bell and Wasserman Media Group were the others.