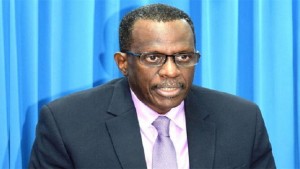 CASTRIES, St. Lucia, Friday June 10, 2016 – The man who served as number two to Dr. Kenny Anthony when he was Prime Minister has been chosen to be his successor at the head of the St. Lucia Labour Party (SLP) – at least for now.

Former Deputy Prime Minister Philip Pierre has been named to fill the void of political leader after Anthony officially quit yesterday. SLP general secretary Leo Clarke announced that the party’s national council would have to meet within seven days of the receipt of Anthony’s resignation to endorse Pierre as acting leader.

Pierre will serve in the position until the SLP’s next convention which is expected to be held in October or November. A leader will be elected at that meeting. Meantime, the SLP’s six parliamentarians are due to meet today to decide on who will be Leader of the Opposition.

Anthony had made it clear after the party was whipped by the United Workers Party (UWP) in Monday’s elections, 6 to 11, that he was stepping down as political leader and also had no intention of serving as Opposition Leader.