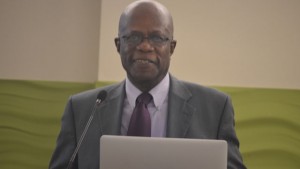 BRIDGETOWN, Barbados — A veteran regional broadcaster has warned of a growing threat to investigative journalism brought about by the increasing challenges reporters face in protecting their sources.

Rogers told close to 70 delegates that increasing use of technology to spy on citizens posed the most immediate threat.

“We are learning every day that all the technology tools we use are subject to scrutiny by governments, spies and criminal elements,” Rogers told the group consisting mainly of media and legal practitioners.

“It is enough to force you to get out two tin cans to communicate and throw your phone and computer over the Kaiteur Falls to be sure that they are not recoverable,” he warned.

Rogers said so serious is the eavesdropping problem, “journalists may be forced to go back to basic tools of communications such as those used by Woodward and Bernstein, the kinds of signals used by cold war spies.”

The Antigua & Barbuda government is taking a bill to parliament this year for the “lawful” interception of personal information. The provision in the Telecommunications Bill has been described as a breach in the privacy rights of residents.

But Rogers said he has seen a disturbing trend in the Caribbean, where “some members of the police force are under the mistaken impression that they can seize the tools of journalists while on assignment.”

In Antigua & Barbuda, there have been instances where the electronic work tools of media persons have been seized by lawmen. The 2015 case of ABS cameraman Brent Simon is well known.

“Just imagine what could happen if the police decided to seize one of today’s smart phones from a journalist. It would be a front door into all their contacts, their emails and the conversations they engage in using apps such as WhatsApp and Facebook,” Rogers warned.