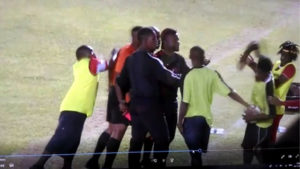 The SKNFA issued a notice on March 12 informing member clubs that the scheduled National Bank Premier League matches were being postponed until further, citing the reason for the postponement as “a developing situation with the referees for the night’s matches”.

The SKNFA went on to apologize for the “unforeseen developing situation” and assured member clubs and and referees of its continued commitment to the security of all involved, on or off the field.

Unconfirmed reports circulating indicate that the referees are calling for improved security during matches, in light of one of the team members for one of the matches at play, running onto the field and hitting a referee in the head during a match this past Saturday.

SKNFA General Secretary Stanley Jacobs told Freedom FM Wednesday that they had received no formal indication of any strike action by the referees on Tuesday. He said that the Association will be issuing a statement on the matter during the course of Wednesday.

Freedom FM was advised that there is no referees association for football. Attempts to reach a senior referee for comment have so far been unsuccessful.

The Football Association has not yet advised of the new dates for the postponed matches.

On Wednesday afternoon the SKNFA issued a notice informing stakeholders “The association is working expeditiously with the referees to address all concerns and to ensure the resumption of the postponed fixtures.”