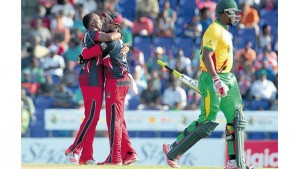 BASSETERRE, St Kitts (CMC) — Trinidad and Tobago Red Steel held their nerve to win a nail-biter, beating Guyana Amazon Warriors by three wickets with a ball to spare, in a low-scoring second game of a Caribbean Premier League double-header at Warner Park on Saturday.

What should have been a straightforward task of scoring the remaining 10 runs from 12 deliveries became a battle of jitters for Red Steel.

South African seamer Marchant de Lange sent down the penultimate over which cost just five runs, paving the way for a dramatic final over by leg-spinner Devendra Bishoo, who finished with brilliant overall figures of four for 24.

Johan Botha scrambled a single from the first ball but Javon Searles rushed down the wicket and missed a swing off the next ball and was easily stumped by captain Denesh Ramdin for two.

New batsman Kevon Cooper and Botha sneaked singles off the next two balls before high drama unfolded off the fifth delivery when Bishoo had Cooper stumped, only for replays to show the right-armer had over-stepped.

Capitalising on his huge slice of fortune, Cooper promptly hoisted the next delivery – a free hit – over long on for six to end the game and ease the tension for Red Steel.

Kamran Akmal had earlier led the run chase with 30 from 17 balls with four fours and a six, while Cameron Delport stroked a lively 22 from 15 balls with five fours and his partner Jacques Kallis, 20 from 21 deliveries.

They put on 23 before Delport was bowled by left-arm spinner Veerasammy Permaul, and Kallis and Darren Bravo (19) added a further 38 for the second wicket to steady the innings.

Both batsmen, however, fell to catches in the deep in successive overs from off-spinners Tillakaratne Dilshan and Sunil Narine, leaving Red Steel on 68 for three at the end of the 11th over.

Kamran Akmal and captain Dwayne Bravo (10) put on 31 for the fourth wicket, but the reintroduction of Bishoo in the 16th over turned the tide.

He promptly ripped his first delivery past Bravo’s defence to rattle the stumps and off the fifth ball, had Kamran Akmal caught by Dilshan, cutting.

Bishoo had his third wicket when Jason Mohammed was also stumped off the final ball of the 18th as the innings headed for a nerve-jangling end.

Earlier, Amazon Warriors were dismissed for a disappointing 118 with two balls remaining, after choosing to bat.

Opener Lendl Simmons top-scored with 50 from 48 balls with three fours and two sixes, but was the only batsman to pass 20 and just one of three to reach double figures.

Medium pacer Dwayne Bravo caused most of the damage with four for 18, while fellow seamers Jacques Kallis (2-16) and Kevon Cooper (2-25) supported with two wickets apiece.

Amazon Warriors slumped to six for two in the third over and never recovered despite a 35-run, third-wicket partnership between Simmons and Brad Hodge (19).