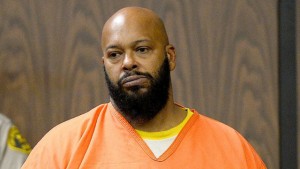 (Reuters) – Rap mogul Marion “Suge” Knight on Wednesday fired his attorney in a robbery case at a hearing in Los Angeles, and also complained to a judge about being taken to court in a wheelchair.

The Death Row Records founder, 49, is accused of stealing a camera in an altercation with a celebrity photographer in southern California.

He is charged with murder in a separate case, in which prosecutors said he ran down two men with a pickup truck at a Los Angeles area burger stand on Jan. 29, killing one of them, following an argument on the set of a commercial for the film “Straight Outta Compton.”

Comedian Katt Williams, 43, is also charged in the robbery case.

During a hearing in Los Angeles Superior Court, Knight did not give a reason for making his request to replace his attorney, David Kenner, when Judge Ronald Coen asked him if that was what he wanted to do.

Kenner, who has a long history of working with Knight, was not present during the court hearing.

Coen set a May 27 court hearing and said until then Knight could seek a new attorney.

Knight, who in previous court hearings this year has complained of health problems and been taken to the hospital, is in custody awaiting trial in the two cases. He was rolled into court Wednesday by sheriff’s deputies in a so-called safety seat.

He complained about the arrangement to the judge, saying that he could walk.

“If you can walk, you can walk. It won’t happen again,” Coen said. He added that Knight had previously complained of paralysis on one side.

Outside of court, attorney Matthew Fletcher, who consulted with Knight during the hearing on Wednesday and represents him in the murder case, said the safety chair was unnecessary.

“Come on, this is getting to the point of abject humiliation,” Fletcher told reporters after the hearing. He said he did not expect to represent Knight in the robbery case.