Raised By a Single Mom With 9 Siblings, He Now Owns 12 McDonald’s Restaurants 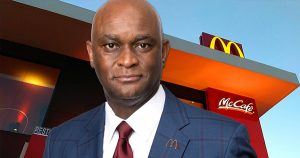 Robert Pyles, a successful entrepreneur that owns 12 McDonald’s franchises in Wisconsin, would have never thought that he would be as successful as he is now when he was a child growing up with 9 siblings being raised by a single mother. But now, he is one of the largest African-American employers in Wisconsin and he is using his past experiences as his motivation.

Started from the bottom

Pyles started in the service industry as a part-time employee at a McDonald’s in Wyoming to earn extra income while serving at the Air Force. Since then, he realized that he loved serving customers and that’s what he wanted to do.

He completed a McDonald’s ownership training program within two and a half years. He then took the opportunity to open a McDonald’s location in Milwaukee, as suggested by the former CEO of McDonald’s Corp., Don Thompson.

He opened his first McDonald’s on February 14, 1998. He admitted that it wasn’t easy at first with all the demands of fast service. But stopping isn’t one of his options. “I told myself ‘never let ’em see you sweat.’ I knew I had to hold true to what I believed,” he told Black Enterprise.

From one location, he opened another one in the next year and it continued growing over the years to up to 12 locations now. Despite that, Pyles believes that success in business isn’t measured by growth.

“You must be prepared for growth and pay close attention to profitability. You can have less stores and be more profitable,” he said. “My goal wasn’t necessarily to keep adding stores. I wanted to create a training center environment to let people see that an African American operator can operate at a certain level.”

With about 45 employees in each location, he employs around 600 people all in all. Aside from providing jobs to the community, he wanted to ease the burden of his employees in finding affordable housing near work. So he partnered with a friend who has a construction business and started Magnolia Realty, wherein they purchase foreclosed properties near his McDonald’s stores, rebuild it, and sells it to them at a reasonable price.

From his rough childhood as one of the nine children raised by a single mother, Pyles now lives comfortably with his wife and three children who work with him in the business. And he wants to inspire others to achieve what he has achieved as well.

“I think it’s really important to be both visible and accessible in the community,” he said. “It’s not enough for me alone to be successful. My goal is to help others get approved for McDonald’s ownership. I started with my wife because there’s no inherited ownership in the event that an owner passes away. Now I’m working on getting others approved.”