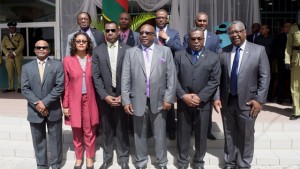 Cabinet of Government of National Unity

“…Unity has not delivered on their fundamental contract with the people to make government and the electoral system open, transparent and accountable which it is not at present and never has been.”

Those were the words of Queens Counsel Charles Wilkin in a recent commentary where he took a critical look at governance under the Team Unity administration, in office now for over 4 years.

According to QC Wilkin, despite Minister Lindsay Grant’s claim that Unity had fulfilled almost all the promises made in its 2015 manifesto, the present administration has failed to deliver on key promises, namely those related to its good governance and transparency agenda.

He said the previous Labour Party administration had neglected to implement much needed reform especially in relation to campaign finance and other governance legislation, however despite Team Unity campaigning on changing that, to date, the present government has not delivered.

“Unity won the election because the electorate was persuaded by them that the last Government had become undemocratic, outmoded and corrupt and was in for too long. They were adamant that the system needs fundamental changes. That was their mantra and theme throughout the campaign. No Government ever delivers on all its promises in a first term and I do not expect otherwise of this administration. However one expects substantial progress in a first term on the key promises.

“Let’s examine where they have reached. Term limits – this is still a grand promise. This was one of the first pieces of legislation introduced in 2015 but it has fallen into abeyance with no explanation. This was the lynchpin of the Unity platform. There will be enormous suspicion if they back off on this. Anti-corruption legislation – the Procurement Act was passed under Labour in 2012 but was given no teeth as they “forgot” to pass the Regulations. Unity has “forgotten” as well. There is still time Lindsay for you and Unity to keep that particular promise. There will be more than suspicion if you do not. There will be a smell.

“Freedom of Information – an Act was passed a year ago but has not been brought into effect. What is the problem? Are Unity having second thoughts? What do they have to hide?Campaign Finance reform – who is paying for the charters. Who is paying the election bribes to voters? We don’t know, we have never known and it seems that we will not know in the next election either. What we do know is that a Governing Party is usually better able to attract campaign finance than the Opposition so maybe Unity wants its turn in that role.”

QC Wilkin also pointed to the lack of enforcement with some of the legislation that would create greater transparency in government.

“Integrity in Public Life– the Act became law on 11th July 2018 and the Integrity Commission has been appointed but again no Regulations so we should not expect any Minister or Opposition Representative to have to declare his assets and liabilities before the next election. And after that who knows. In the mean while we hear plenty “BS” from Unity about the Act. Unity. If you have nothing to fear bring it into full force and effect and let the chips lie where they fall.

“Motion of No Confidence– Unity promised that no one else would have to wait 26 months. The Opposition recently brought a Motion. Unity brought it quickly to the National Assembly but smartly curtailed it using another technicality. Are they having second thoughts on this too? Why haven’t they legislated to force a Government to bring a Motion to Parliament speedily as happens in truly democratic countries. Here too it seems that the system favors them so it is okay now.”

The eminent attorney accused the government of failing to bring reform to the civil service to eliminate political interference and influence, in addition to electoral reform.

“Civil Service Reform – this was initiated 25 years ago but we still have the old colonial system which Unity called “anachronistic”. They promised reform in these words “to void the political influence that is currently so rife”. Maybe they changed their minds now that they have the political influence. Public Radio Stations – Unity went to Court to get access and won but ZIZ remains the same. Unity said they would “provide equal access to state owned media to all Political Parties” but that too is an “almost kept” promise too and they seem content to have ZIZ as the Government’s exclusive mouthpiece.

“No Lindsay, you are not almost there. Unity has done a lot of what you promised but you have a long way to go and plenty more to do to fulfill your contract with the people.

QC Wilkin went on “Unity said the current system was corrupted by the last Government.

You said that you stand for open, transparent and accountable Government and you are against corruption. You promised to replace the corrupt system and you said exactly how you would do so. The electorate voted for that. But you are not doing so and at the same time you are asking for more pay. What impression does that leave? It leaves me with the impression that you want the best of both worlds, more salary and allowances and perks and the same old corrupt system to exploit.”