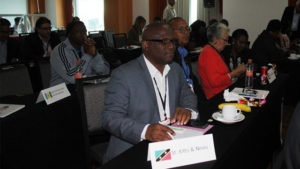 Members of the public and relatives of young athletes are questioning why no athletes from St. Kitts and Nevis traveled to Mexico to participate in the 2019 North American, Central American, & Caribbean (NACAC) Under 18 and Under 23 Championships held this past weekend.

Scotty Hanley, a former executive member of the St. Kitts-Nevis Athletics Association, was a guest on Freedom FM’s Issues talk show on Friday and expressed his concern over the fact that no SKN athletes would have been participating at such an important meet.

“Actually one of the athletes’ relatives reached out to me, Hakeem Huggins, the national champion in the 100m, this is his last year under 23. He was selected but I think he was told like two days before the meet that he got a phone call to say he won’t be going to the meet, which is very unfortunate.

“The calendar of events comes out like a year in advance and these athletes will know that NACAC under 23 is upcoming and they have an opportunity to make that team. Also it’s a precursor to the PANAM games to be held in Peru later this year where these athletes would look forward to getting that mark down…but that’s what happened to the youngster.

“And just to add to that, the President was in Mexico for the NACAC Conference. What you find happened for these championships because for financial reasons they usually have their meeting around the same time as the championship. I have no issue with the president being there, it could have been any executive member from the Association, but if the president can find money to go to that meeting, why is it the athletes couldn’t also attend?”

Hanley said he heard it was an issue of lack of funds why the athletes weren’t being sent to Mexico. He said instead of the Association’s president Val Henry attending the NACAC conference at the outset of the Championships, coaches could have represented the Association at the conference and taken along even one athlete.

When asked why it is the athletes had not traveled to Mexico if that were the case, Hanley said: “That is the million-dollar question.”

“The Sports Department has never gotten involved in anything when it comes to the national [association]; the minister [of Sports] would not know what is taking place in terms of the Association. If the association knew in advance that hey we are tight for funds, this meet is upcoming, I’m certain I they had gone to the public persons would have come forward and helped because the athlete cannot go to the meet on his own; he has to be registered by his federation and the money has to come from somewhere.

“What used to happen in my time, if we were tight for funds the coach as an executive member could speak on behalf of the Executive. Now its so unique that this present Executive has two level 5 coaches, they could have gone to that meeting and taken an athlete with them and stay on for the championship- a lot of countries have done that.”

The former Sports executive said the Association could have approached the Ministry of Sports or the Olympic Committee for financial assistance. He also opined that had sprinter Hakeem Huggins been given the opportunity to participate in the NACAC Championships he would have brought a medal back to the federation.

“I’m certain if [the Ministry of Sports] was approached an they say hey we have this youngster upcoming and we want him to go to this meet but we’re tight for funds., maybe you can assist us in getting a plane ticket or whatever the case may be, could you help us-; or I’m sure that if they had approached the Olympic Committee and say guys I know you gave us some money earlier this year but we had Carifta games and other events and that money was used up, is there any way you can assist us so we can get one or two athletes at that particular meet, could you help us out. And I’m certain, knowing his parents they would have found the money for that youngster to go off to that Championship.

“I’m very upset and angry that St. Kitts and Nevis is one of the powerhouses in track and field in the region and our athletes have not attended. I am not pleased in the direction the sport is heading and the way our athletes are being treated.

“The public needs to demand answers from the Association.”

Attempts to solicit comment on the issue from St. Kitts Nevis Athletics president Val Henry have so far proven futile.