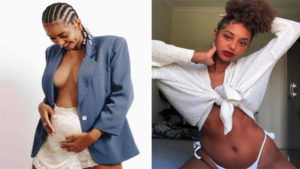 “Thank you Lord for blessing my womb and allowing me to generate the love of my life,” 24 year-old Afro-Brazilian influencer Kathlen Romeu wrote just days before she and her unborn child were tragically killed in a police-involved shootout.

In a heart-shattering double-tragedy, a pregnant Afro-Brazilian influencer and her unborn child were killed in a police-involved shootout in Lins de Vasconcelos, Brazil on Tuesday.

The 24-year-old lifestyle influencer and interior designer Kathlen Romeu was shot by a stray bullet and taken to a hospital but succumbed to her injuries, according to the Brazilian newspaper Folha de S. Paulo.

Just days before the shootout, Romeu posted a photo on her Instagram account showing off her baby bump with the caption “Mom 2021”. In a June 2 post translated from Portuguese, she wrote, “I’m finding myself as a mother and I get scared thinking about what it’s going to be like…A mix of feelings. Maybe the craziest in the world but I’m going to laugh in front of it all.” Romeu added, “Thank you Lord for blessing my womb and allowing me to generate the love of my life.”

It is unconfirmed whether the bullet that struck Romeu and her unborn child came from Brazilian police or civilians in the area where she was at the time of the shoot out. Violent police raids in Brazil, fueled by a government initiative to crackdown on illegal drugs and weapons, has alerted global coverage in recent years and disproportionately ravages Black and Brown communities in the country.

“It all happened very suddenly. My granddaughter fell as a lot of shooting started. I tried to protect her because I knew she was pregnant. I saw a hole in her arm and shouted for help. I lost my granddaughter and great-grandson in a barbaric shootout,” said Romeu’s grandmother who was with her at the time of the shootout. The Sun reports that Romeu’s grandmother told Brazilian media that Romeu had moved away from Lins de Vasconcelos just a month ago to avoid the violence.

“24 years full of life and making a life. So many broken families, broken lives. Until when? This genocide needs to stop. There are no words that can comfort Kathlen Romeu’s family and so many other families. And the feeling of impunity makes everything even worse,” wrote Afro Brazilian physician and Big Brother Brazil Season 20 star, Thelma Assis, on her Instagram on Tuesday.

On Tuesday, Romeu’s partner and father of their unborn child Marcelos Ramos posted photos of Romeu during her pregnancy. One was of her holding a positive pregnancy test, another was of the couple embracing.

“My love will never be forgotten, you and Maya/Zayon will always live inside of me. The ground has been taken from beneath my feet. Sometimes it’s hard to understand God’s will, but I know you’re better than us,” wrote Ramos. “Here I will only miss you and the memories of you, the most radiant and lively person I’ve met in my life..”