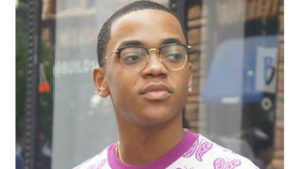 Actor Michael Rainey Jr does not take his role in the hit American television series Power , lightly. He plays the intense, controversial Tariq St Patrick, one of the show’s popular figures.

“My role is very important to the storyline because my character causes conflict, and conflict makes the storyline more interesting. From the reaction of the fans, I definitely feel that my character is important,” said Rainey Jr in an interview with Splash.

Rainey, whose mother is Jamaican, was born in Kentucky but lives in New York. He was here recently soaking up the culture before the next season of Power begins shooting in September.

Although he had previous acting experience, his Power role has made him famous and changed his life significantly.

“ Power has created other opportunities for me. I am not sure if I really do anything differently. Actually, I do not go anywhere by myself but I always say I am a regular teenager,” said Rainey, who turns 18 in September.

His earlier credits include the Italian film Un Altro Mondo, LUV, The Butler, Orange is The New Black, Second Chance Christmas, Barbershop 3, Amateur and 211. He is in his fifth season on Power which first aired on Starz in 2014.

It was while appearing in a music video that he got into acting.

“I was scouted on the street for print work but one day I did a music video — but I didn’t know it was for an Italian artiste. The video was a hit on MTV and Silvio Muccino saw the video. He made contact with my mom and said he knew I was the kid for his movie,” Rainey explained. “They flew us to Italy for 10 days to meet and the next thing I know we were back in New York packing our bags and heading back to Italy to do my first movie in Italian.”

The recent visit was his second to Jamaica this year. He plans to launch an alkaline water product called Purain 22 soon in the United States, and is eyeing a career in music production.

Rainey, who earlier this year won Best Performance (drama) for Power at the NAMIC Vision Awards, also wants to get involved with a charity in Jamaica.

“When I was in Jamaica, I went to the Jamaica National Children’s Home and we started to buy and collect things for the children. We will be sending down the things very soon. We also bought some baby items for another home,” he disclosed. “If we can, we will help others as well, so I’m hoping to get other persons involved so that we can help more.”