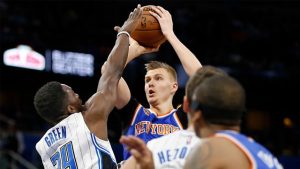 ORLANDO, Fla. — There is no question Kristaps Porzingis is more comfortable playing power forward, where he can take advantage of his superior shooting ability.

But the Knicks’ skilled 7-foot-3 big man has no problem playing in the post. He certainly looked fine there Wednesday night, scoring 20 points and grabbing nine rebounds to lead New York to a 101-90 victory over the Orlando Magic.

Knicks coach Jeff Hornacek elected to go with a smaller unit that included Porzingis at center and four wing players around him to match Orlando’s quicker lineup. It allowed Porzingis to take advantage of mismatches all night.

“Playing at the (center), a lot of times I have more space,” said Porzingis, who was just 2 for 7 from 3-point range but created issues for Orlando in the post. “When I shoot 3-pointers, bigs have a tendency to come and try to protect the rim and that’s when I can get my 3s. Tonight they weren’t falling, but that’s something that is going to be there.”

Porzingis, who missed the previous two games with a sprained ankle, made it a long night for the Magic. They couldn’t stop him with 7-foot Nikola Vucevic attempting to step out on the perimeter, and 6-9 Jeff Green had no chance when Porzingis rolled to the basket.

“His length, his ability to shoot the ball (was a key),” said Hornacek, whose team improved to 25-36. “I thought we were able to spread it out a little bit more.”

That opened up opportunities for Derrick Rose to slash to the basket, reminiscent of his old self. Rose finished with 19 points, while Carmelo Anthony added 17 and Justin Holiday came off the bench to contribute 14.

But as efficient as the Knicks were on offense, their defense was even better.

Playing their smaller lineup, they were able match up well against Orlando all night. The Magic’s offense had little rhythm as they often hurried shots instead of passing the ball to find an open man.

Orlando had just 11 assists and scored only 39 points in the second half as a nine-point game at halftime turned into a blowout.

Evan Fournier finished with 22 points to lead five players in double figures for Orlando. Terrence Ross scored just six while shooting 3 of 10 from the field, including 0 for 5 from 3-point range.

“I don’t think we played hard enough offensively,” said Orlando coach Frank Vogel, whose team dropped to 22-39. “I thought we played harder on the defensive end. We’re trying to be a running team and we didn’t really commit to that.”

A big reason the Magic couldn’t commit to running is because they were slowed by the Knicks. Orlando shot just 41 percent from the field.

“We only shot 42 percent and we were still able to win the game,” Hornacek said. “Our defense against Toronto was good, but it was a ton better tonight. We’re really picking up defensively.”

Magic: Vucevic left late in the fourth quarter with an apparent right knee injury. … Point guard C.J. Watson missed his third straight game with a sore Achilles. He last played Feb. 15 against San Antonio. … The Magic fell to 10-20 at home. … Orlando has not won back-to-back games since defeating the Los Angeles Lakers on Dec. 23 and Memphis on Dec. 26.

GUARDS ON THE BOARDS

A big reason for the Knicks’ advantage on the glass was their guards. Courtney Lee had four rebounds and Rose grabbed seven.

“We want our guards to get four or five rebounds every game,” Hornacek said. “There are a lot of balls you don’t have to go sky and get them.”

Knicks: At the Philadelphia 76ers on Friday.

Check out the team sites for the New York Knicks and the Orlando Magic for more game coverage.