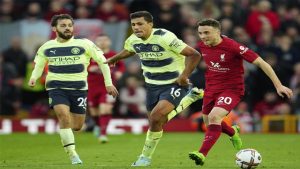 Jota was taken off on a stretcher in stoppage time of Liverpool’s 1-0 win on Sunday and has a serious calf muscle injury.

“It will be for a long time,” Klopp said in a news conference about Jota’s expected absence from the tournament that starts in Qatar in five weeks. “We talk about months, so we will see.

“He knew it when we carried him off the pitch. At that moment he knew already it was a serious one and it could be pretty impactful for his World Cup dreams.”

Jota was an expected starter for Portugal in a group that includes Ghana, South Korea and Uruguay. He has never played at a World Cup.

“After such a good night at Anfield, mine ended in the worst way! In the last minute one of my dreams collapsed,” Jota wrote on Twitter on Tuesday. “I will be one more supporting from the outside, club and country, and fighting to be back as soon as possible.”