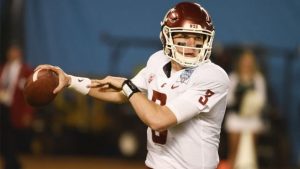 Police in Pullman, Washington released a statement Tuesday night that they found Washington State quarterback Tyler Hilinski dead in his apartment of an apparent self-inflicted gunshot wound to the head.

Hilinski, 21, was a redshirt sophomore who recently made his first start for the Cougars in December’s Holiday Bowl loss to Michigan State. A former 4-star recruit, he was expected to compete for the starting job next season.

Police were alerted after Hilinski failed to show up for practice on Tuesday. They found his body, along with a rifle and a suicide note in a Pullman apartment Tuesday evening. They are investigating to confirm the suspected suicide.

Stefanie Loh, a reporter for the Seattle Times who covers Washington State, tweeted about her shock over Hilinski’s death.

I, too, am in shock. Tyler Hilinski was always gregarious, cheerful and respectful to both the media and his teammates.

But you never know the personal demons each human being is fighting. Be kind to each other, everyone.

My thoughts go out to the Hilinski family tonight. https://t.co/yWWzhbFdwu

Our thoughts and prayers are with the Hilinski family https://t.co/jvqE7hatvB

Hilinski was from Claremont, California.