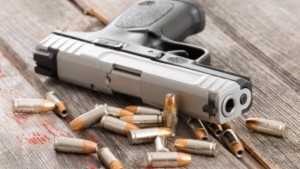 KINGSTON, Jamaica – The police yesterday said their increased operations across the island are yielding fruit, as these operations have resulted in the seizure of nine firearms and 124 assorted rounds of ammunition between Friday, April 17 and Saturday, April 18.

A news release from the Jamaica Constabulary Force’s Corporate Communication’s Unit (CCU) yesterday said lawmen attached to the Kingston Central Division on Friday seized three firearms and a quantity of assorted rounds in downtown Kingston between 4:00 am and 2:00 pm.

The CCU said that operation was carried out on Foster Lane, Water Lane and Orange Street. Several premises were reportedly searched and the weapons – one Taurus 9mm pistol, one Smith and Wesson .38 revolver, one 9mm pistol – as well as 67 rounds of ammunition were seized. The police say no one was arrested in connection with that seizure.

Later Friday, the St Catherine North police seized a semi-automatic shotgun, two 12-gauge cartridges, 20 5.56 cartridges, and four .45 cartridges, during an operation in a canefield in Heartland district, Spanish Town, that the police say was intelligence-led.

No one was arrested in relation to the shotgun seizure, but the CCU said in another incident in St Catherine, a man was taken into custody in the Linstead area after he was accosted on Parade Avenue and a Smith and Wesson .38 revolver with five .38 rounds of ammunition removed from a knapsack he was carrying.

Fifteen .38 rounds were also handed over to the Spanish Town police by a man who found them in a plastic bag on a premises, the CCU release continued.

Meanwhile, in the western end of the island, the police are reporting that about 3:10 pm, lawmen attached to the Whitehouse Police Station in Westmoreland were called to Gordon district in the parish, where a man was allegedly seen brandishing a firearm. He was accosted and a .22 pistol and twelve .22 rounds of ammunition were taken from him.

About 12:30 am Saturday, lawmen from the Green Island Police Station in Hanover were on patrol in a section of the community when a man was accosted, searched and a homemade firearm, one .38 round and one 9mm round of ammunition were allegedly found in the bag he was carrying. He was subsequently arrested and charged for illegal possession of firearm and ammunition.

The police have identified him as 23-year-old Steve Paltie of Green River, Green Island in the parish. He is scheduled to appear in the Western Regional Gun Court on Tuesday, April 21.

A few hours later, lawmen in the Kingston Central Division were reportedly on mobile patrol along Laws Street in Kingston about 2:20 am, when four people, including a woman, were accosted. They were searched and one 9mm pistol with a magazine containing twelve 9mm cartridges, was seized. All four were taken into custody.

Then about 8:30 am Saturday, the Green Island Police seized another firearm – a 9mm pistol – during a vehicular checkpoint operation in the parish. Reports are that lawmen signalled the driver of a motor car to stop, however, he did not comply and was later intercepted, searched and the weapon found. He is now in police custody.

The police say the identities of some of the people in custody are being withheld pending further investigations.