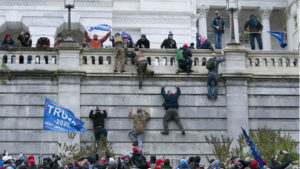 Police departments across the US have launched investigations to determine whether their officers were involved in the pro-Trump riots at the US Capitol on Wednesday.

Investigations were underway in departments across Virginia and Washington DC this weekend, Reuters reported, as a wave of arrests were made for rioters who clashed with police officers and breached the halls of Congress.

In Seattle, Washington, interim Police Chief Adrian Diaz announced two of the local police department’s officers were placed on administrative leave after a probe indicated both were in DC during the violent storming of the Capitol.

Mr Diaz said that while the police department supported the right to free speech, “the violent mob and events that unfolded at the US Capitol were unlawful and resulted in the death of another police officer”.

He added: “If any [Seattle Police Department] officers were directly involved in the insurrection at the US Capitol, I will immediately terminate them.”

Another two officers were placed on administrative leave in Rocky Mount, Virginia, with the police department saying they were both involved in an “event” at the nation’s capital in a statement.

The statement read: “The Town of Rocky Mount fully supports all lawful expressions of freedom of speech and assembly by its employees but does not condone the unlawful acts that occurred that day.”

Police departments weren’t the only institutions announcing the suspension of men and women in uniform. According to Reuters, fire departments in New York and Florida were reporting members who attended the deadly riots to the FBI.

At least 14 police officers were injured and one was killed during the Capitol riots, which took place as Congress convened to certify President-elect Joe Biden’s election victory.

Just before the mob stormed the building, Donald Trump urged a crowd of his supporters, who had gathered in DC for a ‘stop the steal rally’, to march to the Capitol.

The president’s social media accounts were suspended indefinitely after he tweeted a video during the riots continuing to promote false claims of rampant voter fraud.

Social media platforms have reported evidence of plans for further demonstrations in Washington DC, which led in part to their decisions to ban Mr Trump.

Lawmakers on Capitol Hill were also demanding investigations into the US Capitol Police department after videos showed officers removing barriers and seemingly allowing rioters to breach some of the security measures used to prevent them from entering the building.