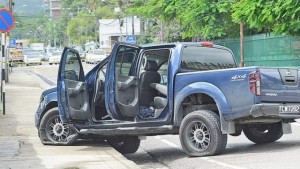 The Nissan Navara where it was left by the three escapees before they ran on to the Port of Spain General Hospital compound. (Photo: ISHMAEL SALANDY/Trinidad Express)

PORT OF SPAIN, Trinidad, Thursday July 30, 2015 – A 38-year-old man believed to have provided the vehicle in which three prisoners fled after escaping from the Port of Spain Prison last week, is in police custody, according to local media reports.

Both the Trinidad Express and the Newsday publications are reporting that the man was arrested yesterday by Guard and Emergency Branch officers at a mosque in Chaguanas, located in central Trinidad, south of the capital.

He was taken to Central Police Station in Port of Spain to be questioned.

The suspect had apparently been sought since the previous day but was only found yesterday after police received a tip-off about his whereabouts.

Prisoners Allan Martin, Christopher Selby and Hassan Atwell fled the Port of Spain jail in a blue Nissan Navara that was parked nearby, on Frederick Street, after they obtained guns and broke out of the prison just after noon last Friday.

The pickup crashed opposite the Port of Spain General Hospital and in the exchange of gunfire between the escapees and police who pursued them onto the hospital compound, Martin was fatally shot as he hid in a guard hut.

Atwell was killed by gang members on Sunday morning and Selby turned himself into police later that evening.

A police officer was also killed during the escape. The 27-year-old Constable Sherman Maynard, who was shot as he sat in the front passenger seat of a police vehicle while on patrol outside the prison, will be buried today.