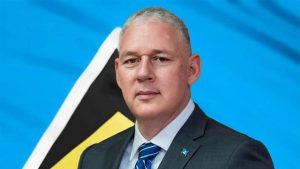 CASTRIES, St Lucia (CMC) – Prime Minister Allen Chastanet has told St Lucians that it is “no secret” that the island has exhausted all of the efforts aimed at providing financial assistance to citizens in the wake of the coronavirus (COVID-19) pandemic and appealed to nationals to follow the various protocols and measures aimed at curbing the spread of the virus that has so far infected 29 people here.

In a television broadcast on Sunday night, Chastanet, flanked by the Chief Medical Officer Dr Sharon Belmar-George and Police Commissioner Severin Moncherry, acknowledged that it had become difficult to raise funds both locally and overseas to finance the programme.

“It is no secret the Government has exhausted all of the efforts, all of the resources with the NIC (National Insurance Corporation) and donor agencies to provide a social stabilisation programme for the public and for those persons who have lost their jobs.

“We have no more money. What we are hoping to do is to regain the strength of our economy so many persons can be re-employed,” Chastanet said, thanking those hoteliers that have re-employed their workers “despite knowing that they are going to lose money for several months.

“I want to thank those businesses that in the worst of times maintained the employment and showed the humanitarian side of economics. But the reality is we have a battle. If in fact there is a community outbreak we have to do everything in our power to contain it as fast as possible,” Chastanet added.

His statement came as health authorities here confirmed that a 48-year-old bus driver had become the country’s latest COVID-19 case and Chastanet warned that if St Lucia lost its status and confidence “the rest of the world has with us, it is going to significantly impact the arrivals that we are having into our country is to lower your standards and so that would be difficult, if not impossible for me and my Cabinet to agree to that.

“I have seen other countries go forward into a similar trap and at that point the only way to continue the economic growth. Therefore, we have to work doubly hard to make sure if we do have a community spread that we can contain it as fast as possible

Chastanet seemed to link the latest case with the illegal entry into the island mainly from the neighbouring French island of Martinique, adding “we don’t know if these people have COVID. Everybody wants to keep it a secret”.

Chastanet said St Lucians have to act as if everyone has the virus, noting also that the public transport drivers were also guilty of not following the protocols and allowing more passengers than required into buses.

He said he was urging all St Lucians to realise the situation “is not a joke” and that there were many people here going about their daily business without wearing masks and advocating that “there is no COVID in St Lucia”.

He also dismissed suggestions that health authorities here were falsifying the figures relating to the pandemic, saying “this is irresponsible.