PM reprimands UWI lecturer and calls on UPP to disassociate itself 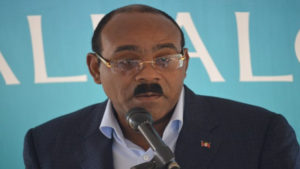 The establishment of the University of the West Indies’(UWI) fourth landed campus here in Antigua and Barbuda has aroused more arguments between disagreeing parties.

Prime Minister Gaston Browne has again resorted to defending his government’s decision to establish the UWI campus against statements made by Giselle Isaac, a lecturer in UWI’s Department of Undergraduates Studies at Antigua State College.

“I rebuke Giselle Isaac in the strongest possible term. I think that she has become so selfish . . . and idiotic person and what she is trying to do here literally is to damage the fourth landed campus, the Antiguan brand, the Five Islands brand – that is what she is seeking to do,” Browne said on his radio station over the weekend.

The Prime Minister is outraged over the recent statements made by the lecturer, who also happens to be the chairperson of the main opposition party, and he has called on the leadership of the United Progressive Party to disassociate itself from the comments made by Isaac.

“I want to further to call upon Harold Lovell and the rest of the UPP to disassociate themselves from her comments, and if they fail to do so, we will have to conclude that that is the policy of the UPP – that they do not see the need to establish a university campus here, and that they perhaps want to promote a culture of ignorance,” Browne said.

Browne’s colorful utterances were in response to the following statements made by Isaac on Friday where she said: “If we were to have a fourth landed campus of Antigua and Barbuda … as things are now, the facilities that we have now and with the behind-back attitude that we have going towards this thing, I would be very disappointed in UWI.

“If I were contemplating going to UWI as a student, I would have second and third thoughts about it. It is a devaluation of the UWI brand. To stick a university inside the four walls of a secondary school, the infrastructure that we don’t have, is a devaluation.”

Isaac, along with several other individuals, is criticizing the logistics for the campus which will be located at a re-purposed facility in Five Islands, originally built to serve as a secondary school.

Should the plans and this facility be approved, the fourth landed campus is scheduled for a September opening – a timeline that Isaac and several others say is unrealistic, impractical and near impossible at this stage.

The lecturer who has been employed with UWI for 17 years, said she has tendered her resignation from the tertiary institution due to the uncertainty and unpreparedness for the September target.

But Browne said Isaac knows the university will begin from nothing, since the country already offers up to two-year programs for some disciplines and has a cadre of over 2000 students readily available to enroll in the Five Islands campus.

“All we are doing now is transitioning into full university status in which they can do their three-year program here, and for her to give the impression as though we are just starting from scratch, and all this effort is needed for September, that is not true because we have a number of lecturers in the system who are already teaching up to second year for a number of disciplines,” the prime minister said.

He added that the disciplines that will be offered initially will be limited to the programs that we already have in place. According to him, such programs include nursing, education, hospitality and business.

By the end of this month, Antigua and Barbuda will know whether or not the governments of the three campus countries of the University of the West Indies (UWI) – Trinidad and Tobago, Barbados and Jamaica – have favorably considered the proposal to establish the fourth landed campus at Five Islands.

In a release issued recently, UWI said the three aforementioned territories were given time to consider the proposal during its annual business meeting of the University Council on April 26th at the St. Augustine campus in Trinidad and Tobago.

“Their submissions will be heard at the next meeting of the University Finance and General Purposes Committee, scheduled for May 30, 2019 at Cave Hill, Barbados,” the communique said.