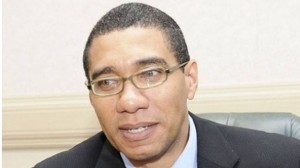 Prime Minister Andrew Holness Monday named an 18-member Cabinet that he says will lay the blueprint for economic growth, create jobs and reduce public debt in Jamaica over the next five years.

Holness, 43, who led his Jamaica Labour Party (JLP) to a one seat majority victory over the then ruling People’s National Party (PNP) in the February 25 general election, also warned members of his administration that “corruption will not be tolerated in this government”.

He told the audience following the swearing ceremony that for the government to be successful “the people who form the government must be willing to sacrifice first and to defend the long-term good of the country over short term expedient gratification.

“I believe that our political process is evolving and that the people who form this government have made that sacrifice and we are defending the long-term good of the country”.

Holness said that the focus, priority and direction of his administration “is to grow the economy, create jobs and reduce public debt to sustainable levels.

“I have organised the government to accomplish this,” he said, making reference to the combination of some of the ministries, such as the Ministry of Agriculture with Industry and Commerce.

“This is a clear signal of intent to accelerate and intensify the vertical integration of agriculture into commercial activity, not just with agro processing but with marketing and finance.

Any deep reader would see the intention to create a production mode in the growth network,” he added.

The Cabinet includes some ministers who had served previously in a Holness government, including Audley Shaw, who retained the post of Minister of Finance, Ed Bartlett, the Minister of Tourism and Dr. Christopher Tufton, the Minister of Health.

“The structure of the Cabinet is an important signal to the country especially investors and entrepreneurs who want to understand the direction, priority and underlying ethic…of the government,” he said, adding that he is confident that the members of his cabinet “will do all these things”.

He said the composition of the cabinet “is the first signal, indeed test that we intend to be efficient and frugal in government.

“This is a tangible difference that we are not only interested in changing governments but we are committed to changing how government works,” Holness said.

Meanwhile, Caribbean Community (CARICOM) Secretary-General Irwin LaRocque has extended congratulations to Holness saying he ‘was looking “forward to working with you in continuing to strengthen our integration movement in the interest of the people of Jamaica and of the wider Caribbean Community”.

In a letter to the new prime minister LaRocque said that the victory of the JLP has provided him with the opportunity to guide his nation through a challenging period in its history.

“You can be assured of my support and that of the staff of the CARICOM Secretariat in your efforts to maintain and build on the progress that your country has made over the years. This in turn would, no doubt, redound to the benefit of the wider Community,” LaRocque wrote.

The new members of the Cabinet are as follows.

The Cabinet ministers are as follows

Audley Shaw, Minister of Finance and Public Service to be supported by State Ministers Rudyard Spencer and Fayval Williams

JC Hutchinson, Minister without portfolio in the Ministry of Industry, Commerce and Agriculture

Horace Chang, Minister without portfolio in the Office of the Prime Minister

Daryl Vaz, Minister without portfolio in the Office of the Prime Minister

Derrick Smith, Minister without portfolio in the Office of the Prime Minister