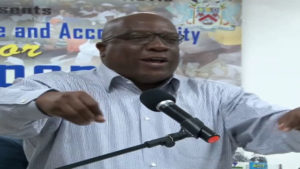 The Opposition St. Kitts and Nevis Labour Party has been celebrating two recent court victories as blows against the government, but Prime Minister Timothy Harris has dismissed the court outcomes as inconsequential.

At a recent townhall meeting in Sandy Point, Prime Minister Harris expressed his views on the court cases, claiming Ross-Robinson had been awarded the same sum the government had initially offered her to dispose of the matter.

“One lady never showed up to work when we were in. we say well if she not coming to work she can’t get no pay, she abandon the job; all of us understand it the same way. If you getting paid thousands of dollars a month and you don’t have the decency to come and say something to your employer, even ask if anything there you can help with, you don’t deserve to be paid.

“We went to the court and the same three months that we were offering her, dat a wa the court offer- how you call that [a win].”

The Prime Minister also weighed in on Natta’s case saying the court had ruled that a law brought by the Denzel Douglas administration was unconstitutional.

“The Honorable Vincent Byron, I heard he get some jabs because people say he lose de case, you shouldnta lose de case. Such as the case them a talk bout, I ain’t even lose a sleep over dem case dey, because what was the case.

“Wid de fella Natta they say they got a big victory! Natta win something! Natta could win anything in Number? That like a movie…they call it Stupidniss. When you hear them a say Natta win a case- stupidness- me could go inna that movie. He went to court and he say that a law passed by Denzil Douglas was a bad law and we say go to the court let the court make a determination.

“The court determined yes, Denzil Douglas civil service law, regulation of 2014 were bad at Sections 36 and 38 and the court advised that you should reform it, they say they win a case- win a case genst who? It’s not we law.”

Dr. Harris went on to say the “big case’ was his political opponent’s pending gun matter, where the senior civil servant was charged for not renewing his gun license and subsequently suspended. The Prime Minister said something was wrong with the civil servant “walking around” for months with an unlicensed forearm breaking the law, when he wanted to become a lawmaker.

Speaking on Freedom Fm’s Issues program following his official launch as a candidate for the SKN Labour Party in Constituency 7, Natta said he had no intention of engaging in political mudslinging. He said he simply wants to serve the people of his constituency and the wider federation.