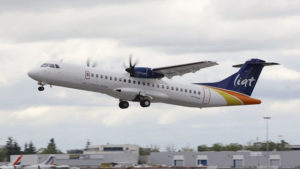 Antigua and Barbuda’s Prime Minister Gaston Browne says his government will never allow LIAT to go under because of the financial challenges it is currently facing.

He was responding to a recent statement by the chairman of LIAT’s shareholder governments – Prime Minister Ralph Gonsalves of St. Vincent and the Grenadines – that the lack of financial input from some regional countries served by the airline could bring about its imminent closure.

“Even if the payments were not made, they will be made,” Browne said of Antigua and Barbuda’s contribution.

Gonsalves, over the weekend, stated that most of the countries served by the airline were not responding favorably to the carrier’s request for a US $5.4 million injection to ensure its survival.

On the other hand, Chief of Staff in the Office of the Prime Minister, Lionel ‘Max’ Hurst, told OBSERVER media yesterday that Antigua and Barbuda has remained true to its commitment to a US $1 million investment in the struggling airline and is encouraging other governments to make the necessary sacrifice

“Antigua and Barbuda did abide by its promise to provide LIAT with more than one million dollars…we are very much aware that LIAT is not only a requirement that has to exist,” Hurst said in response to the Vincentian leader’s claims that Grenada was the only government that acceded to LIAT’s request by pumping approximately one million dollars into it.

Antigua and Barbuda, which has 69 departures, was expected to make its million-dollar contribution by March 15th.

Notwithstanding this, Hurst emphasized his hope that Gonsalves’ prediction does not actualize and that the Caribbean airline will pull through, saying, “There are about 700 LIAT workers stationed here in Antigua and we have a great interest in securing the jobs and ensuring that LIAT continues to do the service that it has done since 1956.”

Antigua and Barbuda, Barbados, Dominica, and St. Vincent and the Grenadines are the four shareholders governments that support LIAT financially.­