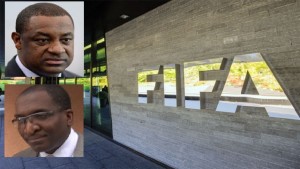 GEORGE TOWN, Grand Cayman, Monday June 13, 2016 – American authorities involved in the FIFA corruption investigation may also be looking into the Cayman Islands Football Association (CIFA) and the disappearance of funds from the Zürich-based football headquarters to CIFA when Jeffrey Webb was president and Canover Watson was treasurer.

The Cayman News Service (CNS) reports that at least one formal complaint has been made from the Cayman Islands to the FBI about the missing CIFA cash, which was given to the association by FIFA for its grassroots football programme GOAL, but which “appears to have helped fund Webb’s luxury home in the US.”

During the trial of Canover Watson over a healthcare payment contract, it was revealed that he and Webb were also intermingling CIFA cash with their own business accounts, according to CNS. Questions regarding the whereabouts of some $250,000 that had been given to CIFA remain officially unanswered.

Although FIFA is supposed to be investigating the missing money and the Cayman Islands Anti-Corruption Commission has indicated that it has received complaints, no one has provided any explanations about the unusual cash movements, CNS said.

It is not clear how far the FBI has delved into the CIFA financing irregularities or what the outcome will be, but CNS reasons that since the money that is missing from the CIFA coffers is from FIFA, it is likely to tie in with the US law enforcement’s ongoing wider football probe.

Webb was due to be sentenced last week for the kickbacks and bribes he received while president of both CONCACAF and CIFA, and vice president of FIFA. The sentencing hearing was nevertheless postponed until November at the request of Webb’s lawyers.

CNS has been unable to confirm if this is because he is now in discussions with the FBI over the CIFA cash. Despite pleading guilty to the specific charges brought by the US Department of Justice, Webb has made no public admissions about the missing FIFA GOAL money and has not been charged by either the local or US authorities in relation to it.

During the CarePay trial, it was suggested that the money went towards Webb’s luxury home near Atlanta, Georgia, where he remains under house arrest on a $10 million bond.

Webb’s friend and business partner Canover Watson is currently serving a jail sentence for his part in the CarePay corruption case. But although Webb has been charged in the same case, he has not yet answered those charges.

Authorities in Grand Cayman say they still plan to try Webb in connection with CarePay and, depending on the outcome of the sentencing in the US, the Office of the Director of Public Prosecutions will be seeking to extradite him back to Cayman to answer those charges.