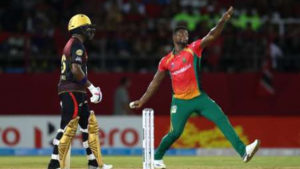 The Knight Riders appeared dead and buried at 91/4 with just six overs remaining and still needing 95 more to overhaul the Warriors 185/6. But Pollard and Bravo went on a ferocious six-hitting spree that almost dragged the unlikeliest of wins out of the fire for TKR.

They came up short, though, with Keemo Paul’s 19th over in which only singles came from the last five balls easing the Warriors’ fraying nerves before Tahir bowled Pollard for a sensational 71 from 38 balls with three balls to go and 21 still needed to at last finish the contest. The final winning margin of 19 runs also highlighted the significance of Romario Shepherd’s late cameo with the bat in the Warriors’ innings – he smashed 32* from 13, with two sixes and a four to finish it off as 25 came from Chris Jordan’s closing over.

Yet another win for the Warriors means they have now guaranteed themselves top spot in the regular season with two games to spare, while the Knight Riders still have work to do to secure their own place in the top two and the safety net of a place in Qualifier 1. One win from their two remaining games will do it.

Having muscled their way to 185/6 despite a troubling mid-innings wobble, the Warriors then strangled the Knight Riders top order through their battery of spinners.

Chris Green once again led the way, bowling his four overs off the reel at the top of the innings, removing the dangerous Colin Munro and Lendl Simmons, and returning figures of 2/18.

Imran Tahir did for Mark Deyal and Shoaib Malik had Denesh Ramdin caught in the deep off a slog-sweep to leave TKR reeling at 53/4.

Not even Pollard could rescue the Knight Riders from there, although he gave it a real crack. He shared a swashbuckling 125-run stand with Bravo, who himself cleared the ropes six times in a 46-ball 58 not out, but the required rate continued to climb throughout the partnership. Even when 57 runs were plundered in four overs from the 15th to the 18th.

Paul’s nerveless 19th over was ultimately key, and across the 40 overs the Warriors were deserving winners.

A 98-run second-wicket stand between Chrandrapaul Hemraj and Shimron Hetmyer then Shepherd’s late fireworks lifted the Warriors to their commanding total.

After the early loss of Brandon King, falling straight after taking Khary Pierre for 10 runs in two balls to start the third over, Hemraj took stock and then took charge.

Only 35/1 was on the board after the powerplay but the boundaries started to flow – for Hemraj in particular, who smashed four Hero Maximums and reached a 34-ball half-century with back-to-back fours off Jordan.

When Hemraj was caught behind off a wide Javon Searles yorker for 66, Hetmyer exploded into life in thrilling yet sadly for the Warriors all too brief fashion.

Searles’ next over started with the wicket of Nicholas Pooran and ended with that of Hetmyer slicing to Pierre at deep point. In between came 17 runs as Hetmyer flayed two fours and a gorgeous six carved high and handsome over backward point.

The failed attempt to repeat the dose saw Hetmyer depart the scene furious with himself and two short of a half-century.

The Warriors innings threatened to subside at that point in the face of some fine bowling from Ali Khan (1/23) in particular.

From 111/1 and 136/3, the Warriors found themselves 143/6 when Malik and Sherfane Rutherford fell to catches in the deep having added just a single between them.

But Shepherd ensured the Warriors would get up past not just 160 but also 180. He flayed a couple of early boundaries through the offside, but it was the two Hero Maximums and one-bounce four with which he finished the innings – 25 in all coming from Jordan’s closing over – that would ultimately take the Warriors out of Pollard and the Knight Riders’ reach.