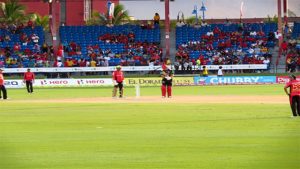 The patriots batted first and were immediately thrust onto the front foot by Evin Lewis who played the entire match, with the bat and in the field without fear.

After the powerplay, the Patriots were in a positions of dominance having posted 65 runs at the cost of just one wicket in the first 6 overs, 46 of which were contributed in that time from Lewis alone.

As wickets started to fall around him Lewis remained composed and courageous as he continued to post another 33 runs until being outfoxed by Sunil Narine in the 12th over. By this point the Patriots were 111-4 and the stage had been set for a decent total but they needed a strong partnership.

After Devon Thomas’ brief stint at the crease which added only another 11 to the total , Shamarh Brooks and Jonathan Carter took the job at hand with the duo closing out the innings in inspiring fashion garnering 58 runs in just 39 balls whilst Brooks posted an impressive 35 not out.

This took the Patriots to a strong total of 180-5 after 20 overs in an unfamiliar ground and by this point fans were encapsulated by their performance and eager for the Knight Riders attempted chase.

Having been set the tough task of chasing 181 in an unknown venue the Trinbago Knight Riders were immediately up against it. These difficulties were compounded when superstar Brendon McCullum was caught by Faf Du Plessis for just one run which was a relief the Patriots as McCullum has struggled thus far in the CPL16 and is due a huge game sooner rather than later.

Despite contractual obligations which caused the pair of Du Plessis and Hashim Amla to have to fly back to South Africa for an awards night in their home country, the latter showed little sign of jet-lag as he steadily got the Knight Riders innings back on track by scoring a quick 33 before being superbly run out by Evin Lewis.

This wicket swung the pendulum of the match into the Patriots favour as at this stage the Knight Riders were just 45-2. However, Colin Munro began a seize on the Patriots bowling line-up and having been dropped on 13 went on to post an impressive 46 from just 28 balls.

His wicket was the most crucial of the Knight Riders innings for the Patriots as he was striking the ball very well and set to drive his team to a victory. After the fall of Munro, Badree, in the following over proceeded to end the game as a contest with two wickets in two balls.

He took the major scalp of the dangerous Umar Akmal and the very next ball bamboozling Denesh Ramdin to gift him with the least sought after prize in all of cricket, the golden duck.

There was some late resistance but when Dwayne Bravo left the pitch after he couldn’t clear the fence with a low full toss from Santokie, the match was over as the Patriots dispatched of the tail of the Knight Riders to win the game by a considerable margin of 34 runs.