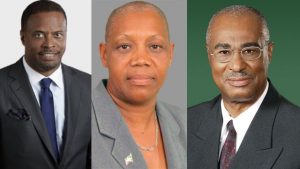 Former Premier of Nevis and Leader of the Opposition Nevis Reformation Party Joseph Parry is calling for regular patrols of police and army on the island of Nevis, but particularly in the communities of Rawlins Gingerland and Cotton Ground where he says rival gangs are gunning down each other.
Parry told Freedom Fm Newsdesk on Wednesday that he was at home when he heard the gunshots that resulted in the death of two young men from Cotton Ground Shariff Williams and Elvis Lawrence.

Parry called on Prime Minister Harris, whose father hails from cotton Ground to do the right thing by being more “proactive” in the fight against crime saying the time for just talk is over.

Parry stated that there was an ongoing gang warfare between the youths of Cotton Ground and Rawlins that had led to four deaths in Cotton Ground over the past two months and five murders in Nevis for 2017. Parry insisted that regular patrols in these “crime areas” by police and army, would help to curb the criminal activity. Asked if calling in the RSS would help to resolve the ongoing and spiraling gun related crimes, Parry said the RSS would be a quick fix but that gang related crimes would return when the RSS left.

Meanwhile Deputy Premier of Nevis the Honorable Mark Brantley in a Facebook message to the nation about the double murders in Cotton Ground Tuesday, called on citizens to “come to grips with the reality that crime and in particular violent crime are symptomatic of deep seated societal ills. There is a bad mindedness and wickedness which has taken over the minds of some members of our community. We now feel that we are entitled to benefits rather than being willing to work for what we want. Parents see and know they have raised monsters and yet protect and defend them.

Elements in the wider family and community do the same. The Police and law enforcement are ridiculed and attacked and we each demand that the other person does more to stop this madness whilst we ourselves do absolutely nothing”.

Speaking to Freedom Fm news desk on Wednesday Chairperson of the SKNLP and Member of Parliament for Constituency #2 the Honorable Marcella Liburd offered “condolences to the families of those who lost their lives so tragically last night in Cotton Ground, Nevis.

We urge our young people who are engaged in criminal activities to STOP THE VIOLENCE NOW!! It is time for us to come together as ONE and take a stand against this crime that is plaguing our beloved country. Whether in government or now in opposition we in the St Kitts-Nevis Labour Party will continue to speak out and take action against crime. We will not play the blame game with crime as some did. Instead we will continue to stay in our communities organizing community events: sports, fun days, health fairs, math classes, camps and development of soft skills to name a few. These community-building events keep our young people positively engaged and occupied and steer them away from gangs, guns and an early graves”.