Outrage in Guyana as Missing Teen Found Sodomized and Murdered 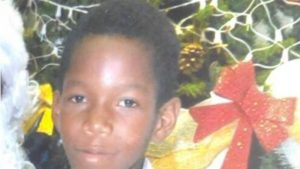 Shock, outrage and loud demands for justice are reverberating across Guyana after a desperate search for missing 13-year-old Leonard Archibald ended in a grisly find over the weekend.

The teen’s decomposed body was found in the Berbice River on Saturday, six days after he was reported missing.

Archibald disappeared while he and his sisters were returning home at Brother’s Village, East Bank Berbice from a birthday party.

Police had made a major breakthrough in the crime last Friday, after two suspects took police to area where they confessed to throwing his body into the river.

His body was, however, not found.

The following day, relatives and friends of the youth who was described as “very helpful” ventured out in a boat, and just after an hour they made the dreaded discovery.

“We search for like an hour and we find he body tangle up between some vines,” Vernon Cozier, a member of the search party told Demerara Waves.

Police confirmed that Archibald was the victim of a brutal sodomy and murder.

Berbice Divisional Commander, Assistant Commissioner Lyndon Alves, said one of the suspects confessed to the crime and information provided by the other one will lead to murder charges early this week.