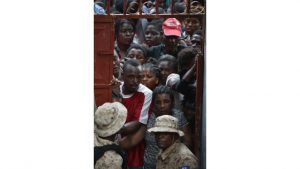 Residents await their turn to obtain food and zinc sheets for roofing at a local distribution center in the city of Jeremie, southwestern Haiti, on October 22, 2016, in the aftermath of Hurrican Matthew

PORT-AU-PRINCE, Haiti (AP) — A young woman in Haiti was killed and five others injured when a fight broke out while authorities were distributing food to hurricane victims, government officials said Wednesday.

Looters apparently threw stones and conch shells at police and United Nations peacekeepers, who responded with tear gas and projectiles as a crowd gathered around a boat delivering supplies on Tuesday, officials said.

It was unclear how the 18-year-old woman died and how the other injuries occurred. Officials say one person was seriously injured.

The incident occurred in the small coastal village of Dame Marie, west of the city of Jeremie that was marooned for several days after Hurricane Matthew hit Haiti as a category four storm.

Government officials said they are investigating and have ordered local authorities to help the victims’ families.