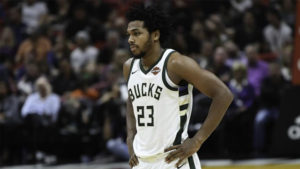 Milwaukee Bucks guard Sterling Brown filed suit against the city of Milwaukee and the city’s police department. One of the officers was fired Thursday.

The Milwaukee Police Department reportedly fired one of the officers involved in the arrest of Milwaukee Bucks guard Sterling Brown, though it wasn’t due to his conduct the night of the arrest.

The officer was fired for violating the squad’s social media policy, according to a report Thursday in the Milwaukee Journal Sentinel. Police chief Alfonso Morales did not name the officer who was fired, but it was Erik Andrade who was investigated by internal affairs and made the previously published posts on Facebook.

“This is unfortunate … firing somebody is very serious in a profession such as this,” Morales said, according to the Sentinel.

Andrade was one of the responding officers Jan. 26 when Brown was arrested in a Walgreens parking lot after becoming “combative,” according to reports. Officers later put him on the ground and used a Taser on him when he didn’t take his hands out of his pockets immediately as ordered. Police conducted a “business check” and came upon Brown’s car parked across two disability parking spots, according to the report.

Brown filed suit against the city of Milwaukee and the Milwaukee Police Department in June. He was never charged. A review by the police department found Brown’s actions did not warrant a criminal charge; the Milwaukee mayor said in May he was concerned about the behavior of officers that night.

Officer posts on Facebook while Brown is in jail
In his lawsuit, which asserts the department violated Fourth and Fourteenth Amendment rights, Brown cited Facebook posts and “racist memes” that Andrade shared on Facebook.

The first was posted at 8:21 a.m. the day of his arrest, while Brown was in custody.

“Nice meeting Sterling Brown of the Milwaukee Bucks at work this morning! Lol#FearTheDeer” he wrote.

In April he shared a meme that mocked Kevin Durant’s hair, comparing it to a chocolate ice cream cone with chocolate sprinkles. And during Game 1 of the NBA Finals — slightly more than a week after public outcry at the video of Brown’s arrest the department released — he shared another Facebook status that mentioned doing the same thing to Cleveland Cavaliers guard J.R. Smith as the department did to Brown.

The post was made shortly after Smith rebounded a missed free throw in a tie game and let the clock run out. The Cavs lost in overtime.

“Andrade’s post is an admission that he and other Defendant officers are allowed to engage in unlawful attacks and arrests of African Americans without justification and then relish such events without any fear of real discipline,” Brown’s attorney, Mark Thomsen, wrote in the lawsuit.