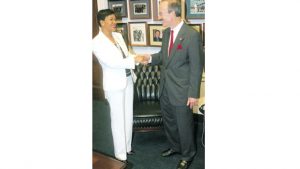 WASHINGTON, DC — Legislation to enhance the United States’ engagement with the Caribbean is now heading to President Obama’s desk for signature, after it was passed by both the House of Representatives and the Senate.

Ranking member of the House Committee on Foreign Affairs Eliot Engel and former Chairman of the Committee Ileana Ros-Lehtinen made the announcement last week on Capitol Hill, pointing out that the Act calls for a new, long-term strategy to strengthen ties between the United States and its Caribbean neighbours.

The United States-Caribbean Strategic Engagement Act (HR 4939) will strengthen relations with the Caribbean by requiring the Secretary of State and the Administrator of the US Agency for International Development (USAID) to submit to Congress a multi-year strategy focused on enhancing engagement with the countries of the Caribbean. The legislation puts particular emphasis on energy security, countering violence, expanding diplomacy and providing educational exchange opportunities for citizens of the Caribbean.

In reacting to the bill’s passage, Congressman Eliot Engel, one of the authors of the legislation, said “at a time when our friends in the Caribbean need us more than ever, this bill will prioritise our partnership with the sub-region for many years to come. It is long past time to have a multi-year strategy that will allow us to increase engagement with the Caribbean, especially when it comes to energy and security”.

Congressman Engel pointed out that “the countries of the Caribbean are profoundly important to the United States, and particularly to the many Caribbean-American citizens in our country”.

He said that he was looking forward to working with the Caribbean-American Diaspora to ensure that they could provide input to the State Department and USAID on US relations with the Caribbean in the years ahead. “With constant crises around the globe that demand US attention, we must not lose sight of our long-term interests close to home,” Engel said.

In her remarks, Congresswoman Ileana Ros-Lehtinen said, “I am honoured to work alongside my friend and colleague Eliot Engel in order to send this important legislation aimed at prioritising our bilateral relationships with allies in the Caribbean to the President’s desk.

“We must strengthen our relationship with Caribbean nations so that they view the US as a reliable partner and push back against the negative influence of Venezuelan President Nicolas) Maduro’s corrupt regime in the region. It is vital to work proactively and collaboratively with Caribbean nations to promote close cooperation in the areas of security, trade, illicit trafficking, and energy and I look forward to seeing this important legislation implemented in order to advance our own national security interests,” Ros-Lehtinen said.

In welcoming the passage of the bill, Jamaica’s Ambassador to the United States Audrey Marks, commended Congressman Eliot Engel and US Representative Ileana Ros Lehtinen for piloting the bill.

“She pointed out that the legislation had a speedy passage through both the House and Senate and commended the members of both houses for the passing of this important piece of legislation.