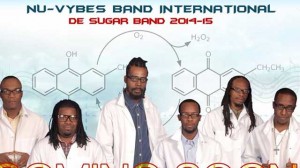 Nu Vybes International is the first band to launch their music for Sugar Mas 43. According to band leader and vocalist Gregory Mr. Mention Hobson, the band in response to their multitude of fans wanted to release early for Carnival and put intensive effort into making this possible while maintaining the sweetest music which is associated with the band over the years.

Last night was no exception and the release of “the Formula” was done before a captive radio and internet audience.

Sister Sensia played all the tracks on the CD to loud praise and plenty love coming in via phone, Whatsapp, text and Facebook from the adoring Nu Vybes and freedom family worldwide.

According to John ‘Webmaster’ James there were 731 following the Nu Vybes release via mobile and 528 online listeners in addition to the thousands on radio at 106.5 fm.