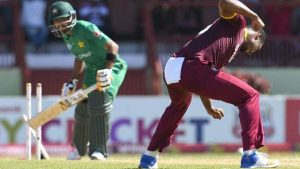 Simply put West Indies did not score enough runs to challenged the Pakistan batsmen in the final One Day International of the Brighto Paints presents the Q Mobile Cup Series at the Guyana National Stadium in Providence, Guyana, yesterday.

An unbeaten century from Shoaib Malik– 101 not out– helped Pakistan to an easy six-wicket victory in the series-deciding ODI as the Windies bowlers failed to press their advantage after three early breakthroughs rocked the Pakistan chase.

Having restricted the West Indies to 233 for nine from their 50 overs, Pakistan slumped to 36 for three in their reply before a stand of 113 between Mohammad Hafeez and Malik got them back on track.

While Hafeez (81) fell 19 short of his century, Malik was there to hit the winning runs as the tourists clinched victory inside 44 overs, to take the series 2-1.