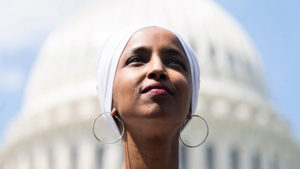 As a woman of colour who wears a headscarf, I am more wary than ever of life in America. Since Minnesota representative Ilhan Omar was elected to congress last year, Trump has been making racist attacks and inciting violence against her at every opportunity.

I have watched the president of the United States, the man in charge of the most powerful nation on earth, tell Americans like me to return to the “crime infested places” from which we came. I have watched him insinuate a Muslim American woman is in some way responsible for 9/11. It is little surprise that, following the infamous chants of “send her back” at a North Carolina Trump rally, security protecting Omar had to be stepped up. This is violent white supremacy in action.

Now Trump’s vitriol towards Omar has spilled into other domains. Most recently, a Facebook post indicates that Omar has been arrested 23 times and is the daughter of a Somali terrorist. The president himself has encouraged these conspiracy theories, telling reporters last week that there was “a lot of talk” that Omar was once married to her brother.

The propaganda campaign against Omar shows no signs of stopping. This is not only an attack on Omar and her family, but all minorities that make up the fabric of this nation. Given that Omar is a visibly Muslim woman, who wears a headscarf, there are serious ramifications for people like me.

Like Omar, I am a Muslim American who also happens to be a person of colour. The combination of hijab and being brown does not always go down well in our predominantly white society. Because of my appearance, I am all too often subjected to judgement. This makes me feel like anything I say, like Omar, has the potential to be taken out of context. It makes me feel that I, like Omar, am also under the magnifying glass. I should not have to fear for my life or that of any other Muslim. If we allow such cruel rhetoric to snowball, we are contributing towards our own demise.

Moving forward, normalizing the hijab would be the first step towards removing stigma and pressure against women like myself and Ilhan. Engaging in dialogue about topics that make us uncomfortable, such as the hijab, can also help to dismantle stereotypes and increase understanding.

It is certainly no coincidence that the two US congresswomen reportedly barred from entering Israel are women of colour, with one of them wearing the hijab and following the Muslim faith. This ban was allegedly made at the president’s request, and is the reality of how Muslim women are stigmatized. It seems the defenders of free speech grow quiet when it is Muslims who are being unfairly silenced.

From the start of our democracy, politicians have proudly held starkly different views. But have attacks ever been as vicious as they are against Omar? We need to get back to a time of civil debate instead of attacks and censorship. And I’m not just talking about Trump: many Democrats have also facilitated the silencing of Omar.

If the US constitution is to mean anything in our everyday lives, we must all come together to ensure that Muslim women are no longer living in fear.