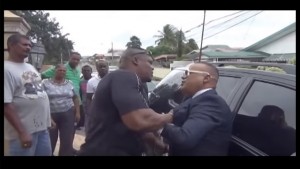 A screenshot from the video showing the altercation between Ian Alleyne (right) and Inspector Roger Alexander.

PORT OF SPAIN, Trinidad, Thursday February 18, 2016 – Despite allegations that a senior lawman abused his power and used excessive force in arresting a popular television crime show host, the Trinidad and Tobago Police Service (TTPS) says there will be no investigation.

Public information officer with the TTPS, Acting Assistant Superintendent of Police Michael Pierre, made that clear to the media yesterday, as host of CNC3’s ‘Crime Watch’ programme, Ian Alleyne, appeared in court yesterday and denied charges of resisting arrest, using annoying language and obstructing a police officer in the execution of his duties.

Alleyne was arrested by Inspector Roger Alexander – who is also host of another crime show, ‘Beyond the Tape’, on rival television station CCN TV6 – outside the home of businessman Sheron Sukhdeo, who has been accused of domestic violence.

Video circulating on social media shows the confrontation between the two, as Alexander forced Alleyne off the property, at one point slamming him a vehicle.

Alleyne’s lawyer Gerald Ramdeen said his client had been victimized and the recordings would confirm that.

However, when questioned at the TTPS weekly media briefing yesterday, ASP Pierre repeatedly said “there is no investigation in that matter”.

His response remained the same when pressed to say whether there would be no probe at all, or just not at this time, and if the TTPS was standing by Alexander’s actions.

But fans of the television host were clear in their support for him.

Several of them flocked to the Chaguanas Magistrate Court as he appeared to answer the charges brought against him.

Alleyne pleaded not guilty and was released on bail. He returns to court next month.

Meantime, also appearing in the same court, 31-year-old used car dealer and realtor Sukhdeo was granted TT$85,000 (US$13,106) bail on charges of maliciously wounding his wife Rachel Sukhdeo on February 11, and assault occasioning her actual bodily harm on February 12. However, local media reports indicate he spent the night behind bars because his bail had not processed by the end of the day.

The alleged domestic abuse came to national attention after his wife posted photos, on her husband’s business Facebook page, of the injuries she said she had sustained as a result of his beatings.

The photos have since been deleted.