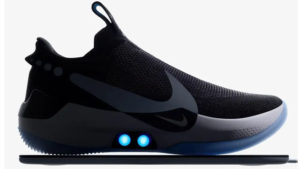 Self-lacing trainers of Back to the Future fan dreams have now become a reality as Nike unveils a new pair of connected shoes that can be controlled from a smartphone.

The new Nike Adapt BB feature what the sportswear brand calls “power laces”, which tighten or loosen at the press of a button either on the shoes or through a connected smartphone app.

Designed for basketball, the shoes can be programmed to remember different fit settings that users can switch between in different situations, such as moving from playing a game to resting on the sidelines, says Nike.

Users will also be able to customise light settings and “download updates” on the shoes.

Nike also confirmed the shoes will require charging, and a recharging mat will come with each pair.

The brand added that it plans to expand the technology used in the shoes to other sports and shoe ranges in the future.

On Monday, Nike teased news of the trainers’ release on Instagram showing a number of high-profile basketball players using a phone to adapt the fit of the shoes.

The video was accompanied by the message: “The game will never be the same.”

This isn’t the first time Nike has experimented with technology in its footwear.

In 2016, the brand released a limited edition pair of self-lacing shoes inspired by those worn by Michael J Fox’s character Marty McFly in the 1989 film Back to the Future Part II.

It then launched a range of automatically lacing shoes for athletes in its HyperAdapt range.

Nike’s latest self-lacing trainers will initially go on sale in the US for £272 ($350), but will be made available worldwide on 17 February.