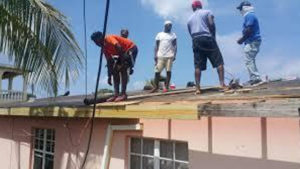 Homes on Nevis damaged by Hurricanes Irma and Maria in September 2017 are still being fixed under the federal Hurricane Roof Repair Program.

The program was implemented in April 2018 and one year later the government reported that more than 2,000 households in St. Kitts and Nevis have benefited.

Speaking at a press conference Wednesday, Nevis premier Mark Brantley said persons are coming forward claiming their homes had been damaged in the hurricanes two years after the fact, however that could not be verified. He said most of the persons whose damage had been assessed prior have been assisted, and the NIA will respond shortly to people still waiting who are suitably qualified for assistance.

“The Hurricane Roof Repair Program, the last update I had is that it continues apace. I think the people who are focused on are those who would have reported hurricane damage at the time of the last hurricanes. We’ve had some folks who’ve come forward now that they hear some relief is available to say that they suffered damage during the hurricane. We can’t prove that; there’s no way we can establish that at this stage, the hurricanes having been some two years ago.

“I’m told that the program is proceeding and those that were affected and still find themselves in damaged circumstances from those storms are the first priority and those people are being dealt with. I believe that at a different time we will have a more fulsome update when I can give you numbers but at this stage I know that they are working and the model I gather that has been employed is really to allow people to identify their own builders and contractors and the estimate comes in and once we have verified that, the government provides the necessary material and funding to do the work. So it’s not like the Public Works department is engaged in that it’s really private sector driven and our effort yet again to ensure that monies that are being spent are spent in the community.

“So that’s a process that is ongoing and I’m told that some roofs have already been done. In one or two case I’m told we will have to construct an entire home because of how badly damaged persons were and those are in train. I certainly will come in the future and give the details on that.”

When asked about possible concessions on hurricane relief supplies and equipment for the 2019 Atlantic Hurricane Season, the Premier said the NIA Cabinet will consider adding generators to the concession already given last year for hurricane shutters.