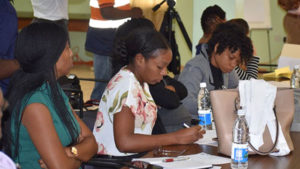 As the 2019 Atlantic Hurricane Season approaches, the National Emergency Management Agency (NEMA) held a workshop for media stakeholders on May 29, at the agency’s conference room, in an effort to sensitize them on the role they play before, during and after a natural disaster.

Val Henry, CEO at Vhcommunications and Marketing Agency, and the keynote speaker for the event, said that purpose of the workshop was to examine what the role of the media is when it comes to disaster management and also to establish protocols of communication between NEMA and the media, explore areas of mutual benefits for the media and for NEMA, and to highlight some of the serious consequences of poor communication.

Additionally, some other objectives include to create new models of partnership, open dialogue on a possible national emergency alert system, to encourage more and regular news stories from the media about disaster management and to enable and promote and manage a culture mechanism when it comes to safety and security.

Lesroy Williams, Chairman of Education, Awareness and Early Warning Sub-Committee, said “It is important for the media to play its part in education awareness, early warnings, when it comes to disasters.”

“I impress on you the important role that you play in partnering with NEMA, the government’s information agency and other agencies in creating this awareness so that we can mitigate the damages from natural disasters,” he said.

Public Relations Officer of NEMA, Vesta Southwell, said “we want to define a new path of engagement between the agency and the media, who we consider to be our most critical stakeholders in what we do here.”

“We just want you to partner with us in ensuring that our communities remain safe, that residents are informed with critical information so that they may make informed decisions in terms of their own safety and security. That partnership cannot be overstated,” said Ms. Southwell.