Home / Sports / NBA Finals: Warriors surge in third quarter, hold on to even series in Toronto

NBA Finals: Warriors surge in third quarter, hold on to even series in Toronto 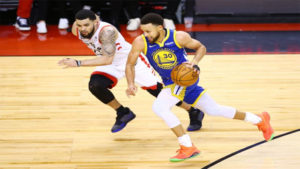 The Golden State Warriors slipped in their opening NBA Finals game, falling by nine points in Game 1 on Thursday.

Despite multiple injuries and falling into another early deficit, the defending champions roared right back in Game 2.

Golden State pushed ahead in the second half on Sunday night at Scotiabank Arena, and fended off a late fourth-quarter rally to beat the Toronto Raptors 109-104, evening the series 1-1 before it heads back to Oakland this week.

Warriors take off in third quarter, fend Raptors off late
After falling into multiple double-digit holes in the first half, the Warriors took off in the third quarter like so many playoff games before.

Golden State, trailing by five points at half, opened the third quarter on a massive 18-0 run — completely stealing away any momentum the Raptors had accumulated in the first half. It wasn’t their offense that was the most impressive part of that run, however. It was their defense, which held Toronto scoreless for the first 5:40 of the third quarter.

Despite the run — which Warriors coach Steve Kerr acknowledged was the big point of the game — it was their rally at the end of the half that he credited the third-quarter burst to.

“I think we were down 12 (in the second quarter), the place was going nuts, we couldn’t score,” Kerr said. “Steph and Klay both got loose and the game loosed up a little bit and we scored. We weren’t exactly making stops, but we cut the lead to five and could kind of breathe at halftime. I think our guys kind of felt renewed life at that point and came out and just had a great run to take control of the game.”

Finally, Raptors guard Fred VanVleet — who finished with 17 points off the bench, shooting 7-of-17 from the field — drilled a corner 3-pointer to break the cold streak. By the end of the period, Toronto had shot just 7-of-22 from the field. Their once-double-digit lead had turned into an eight-point deficit.

Toronto finally bounced back late in the fourth quarter — thanks to a huge 10-0 run over a more than five-minute span late— and cut the Warriors lead to just five points with 51 seconds left. Then a Danny Green 3-point bucket cut the game to just two points, sending Scotiabank Arena into a frenzy.

On the next possession, though, Andre Iguodala answered with a wide-open 3-pointer with just seven seconds left to push them back up by five points, sealing the deal.

Steph Curry out to slow start, ‘low energy’
Warriors star Steph Curry got out to a sluggish start on Sunday night, to say the least.

Curry played sparingly in the first quarter, and was subbed out multiple times. The Warriors’ medical staff was seen evaluating Curry when he was on the bench, too, and even once went back to the locker room. The usually energetic shooting guard just looked out of it.

“I think he may have been a little dehydrated,” Kerr said, via 95.7 The Game. “That was the word I got. He just was feeling a little lightheaded. (He) went back to the training room, and came back and was feeling much better … that’s all I’ve got for you.”

While he returned to the game — Curry finished with 23 points in 40 minutes — he missed his first six shots of the contest and didn’t hit his first field goal until late in the first quarter.

With Curry struggling early, Klay Thompson stepped right up. Thompson scored 11 of Golden State’s first 13 points, and finished with a team-high 25 points while shooting 10-of-17 from the field. He was forced out of the game in the fourth quarter, however, after landing awkwardly after a 3-point attempt and injuring his hamstring. He played nearly three more minutes before limping to the sidelines and directly to the tunnel.

Toronto took advance of Curry’s absence early, too. The Raptors mounted multiple major runs in the second quarter, building up a 12-point lead behind 16 points from Kawhi Leonard and 12 more off the bench from VanVleet.

Finally, though, Curry found his game.

After hitting his first field goal near the four minute mark of the second quarter — a highly-contested 3-pointer from the wing — Curry hit another on the very next possession, and added a pair of layups in the final minute to cut the Raptors 12-point lead down to just five. By halftime, Curry had recorded 16 points, shooting 4-of-10 from the field.

But on Sunday, his first time back in the starting lineup since the injury, Cousins shined.

Cousins finished with a double-double with 11 points and 10 rebounds, adding eight assists, and played nearly 28 minutes — significantly more than Kerr had planned on.