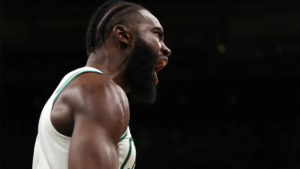 The Celtics punched back at their bullies in Game 3 of the NBA Finals.

Boston’s 16-rebound edge on the glass was evidence of a forceful response to the Golden State Warriors’ blowout victory in Game 2, while Jaylen Brown, Jayson Tatum and Marcus Smart combined for 77 points in a 116-100 victory. The Celtics take a 2-1 lead in the series ahead of a home Game 4 on Friday at 9 p.m. ET.

Stephen Curry led the Warriors with 31 points in defeat before leaving with an apparent foot injury with two minutes left in the fourth quarter. Golden State does not anticipate updating his status until Thursday. Klay Thompson added 25 points in a bounce-back game for Golden State. Draymond Green, whose intensity propelled the Warriors to victory on Sunday, fouled out with two points and four rebounds in 35 minutes.

“I was soft,” Green said plainly after the loss.

If ever there was a doubt the Celtics would match the energy the Warriors brought in Game 2, Boston answered it in the opening quarter. Led by a reinvigorated Robert Williams III (10 rebounds, eight points, four blocks, three steals), the Celtics outrebounded the Warriors 16-3 in the first eight minutes, grabbing as many offensive rebounds as Golden State had altogether. Brown attacked Green off the dribble and rose over him from the perimeter, scoring 17 of his 26 points on 6-for-9 shooting (3-4 3P) in the first quarter.

The Warriors missed eight of their first 10 attempts from 3-point range and could manufacture nothing against Boston’s length on the interior. Even as Thompson heated up, the Celtics responded, finding layups in favorable matchups against Curry, Poole and practically everyone Golden State threw at them. Boston doubled the Warriors’ 16 points in the paint and outscored them by 10 on second chances in the first half.

Golden State made an inevitable run over a 40-second span midway through the second quarter, once again taking advantage of the Celtics’ carelessness with the basketball. Thompson and Curry sandwiched 3-pointers around an Andrew Wiggins dunk on three straight possessions, and a minute later Curry’s layup cut what was a 17-point deficit to 56-49 with more than three minutes still left to play before halftime.

Boston netted five straight and pushed the lead back to 12 at the break. It should have been more. The Celtics scored 68 points on 57% shooting from the field and 44% accuracy from deep through the first 24 minutes, but turnovers continued to plague them, as the Warriors scored 14 points off their eight miscues.

Everyone watching anticipated more third-quarter magic from the Warriors. It did not come for six minutes. One possession changed all that. Curry drained a 3-pointer, and the officials confirmed Al Horford stepped into his landing space. The flagrant-1 foul gave Golden State a free throw and the ball. Otto Porter Jr.’s 3-pointer made it seven points on a single trip down the floor, and Boston’s lead was trimmed to 82-80.

Another Curry 3-pointer, another minute later, gave Golden State its first lead since Kevon Looney’s layup 17 seconds into the game. Curry and Thompson combined for six of the Warriors’ seven 3-pointers and 15 of their 33 points in the the quarter, but Boston did just enough to cling to a 93-89 lead entering the fourth.

Failure to finish at the rim frustrated Tatum during the first three quarters, but he broke through in the final frame. He targeted Curry, whose fourth foul cost him enough aggression to open the door for Boston. The Celtics amped their defense in return and began the quarter on a 9-2 run to extend their lead back to 11.

Golden State got no closer than eight points the rest of the way. Tatum scored nine of his 27 points and Smart added eight of his 24 before Boston coach Ime Udoka pulled his starters with two minutes still to go in the fourth. When the final whistle sounded, the Celtics scored 52 points in the paint to the Warriors’ 26 and 22 second-chance points to their 11, grabbing four of their 15 offensive rebounds in the fourth quarter.

Boston won the hustle and the game, a reoccurring theme in this series. Who will be the bully on Friday?