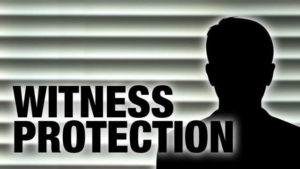 Witness protection program…is it in effect in St. Kitts and Nevis? That is one of the questions posed to National Security officials on a recent edition of Working for You.

A caller to the talk show alleged that several of the murder victims in recent times were key witnesses to serious crimes who were killed just before they could testify in court.

The eight to ten murders that we’ve had for the year it is rumored that a number of them were to give evidence or to be in court shortly. Over the years I’ve heard high ranking government officials saying there’s a witness protection program in place, if there is such, how come the police and National Security know of these persons are due in court shortly are allowed to be moving around normally and then you hear a week or couple days before the case they are gunned down?”

Permanent Secretary in the Ministry of National Security Osmond Petty said witness protection is definitely something the entire region has to look at seriously, not just St. Kitts and Nevis. He said it is an extremely costly apparatus, but was reticent to reveal much detail on the existing parameters and future plans for a local witness protection program.

“Witness protection- all I can say in this forum is that it is a major consideration across the region. I just came from the RSS program and we had a paper which I shall be sharing with the relevant authorities shortly.

Witness protection is a costly effort not that one wouldn’t want to spend the money but there are a lot of other issues involved and I don’t think we can go into it at this forum.

“I take the callers point that we’re going to have to- and not just St. Kitts and Nevis, the region- deal with this problem of safeguarding witnesses because we do have the problem here and other countries have the problem but it’s a collaborative effort.

“There are measures being taken but I don’t think I can discuss them here.”

Retired Commissioner of Police Austin Williams tells Freedom FM that a witness protection program is critical to crime fighting efforts in the federation, especially in light of the fact that major criminal cases have been lost after witnesses had been executed.

“I always advocate for witness protection. I know we’ve done it in the past, in doing so we ended up sending people overseas and you that is expensive. We’ve also kept persons at the police station but it almost turns out that the person is in prison as well. I had advocated for building out an area at the Defense Force Camp- I think that might have worked but it has never come through but it is very important.

“We have lost many cases due to the fact that get taken out or are afraid to come forward, so witness protection is very important; it is a critical component of crime fighting.”

The Retired Commissioner stressed that it is crucial for the government to invest in such an initiative.