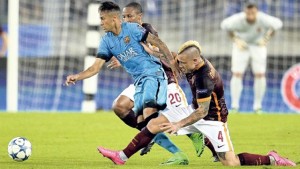 Reigning champions Barcelona were held to a 1-1 draw at Roma, while Chelsea thumped Maccabi Tel-Aviv 4-0.

An Alex Oxlade-Chamberlain own goal and a header from Junior Fernandes gave Dinamo three points as France forward Olivier Giroud was dismissed for two first-half bookings for Arsenal.

Zagreb took the lead from virtually their first attack of the game as Leonardo Sigali slipped in Josip Pivaric whose shot was saved by David Ospina, only to rebound off Oxlade-Chamberlain and go in.

By that time Giroud had already hit the post and been booked for dissent, and five minutes before the break he was late and high in a tackle and received his second booking.

Dinamo capitalised on 58 minutes as Fernandes headed home a Paulo Machado corner at the near post as Arsenal’s defence went walkabout.

Theo Walcott gave the Gunners hope 11 minutes from time with a cool, low finish from Alexis Sanchez’s pass, but it was too little too late as Dinamo earned their first ever win over an English side.

In Rome, Barcelona opened the scoring on 21 minutes as Uruguay forward Luis Suarez headed home at the back post from a yard out after he was found by Ivan Rakitic.

But 10 minutes later, full-back Alessandro Florenzi spotted Marc-Andre ter Stegen off his line and lobbed him from more than 40 yards out and wide on the right.

The Blues could even manage to miss a first-half penalty through Edin Hazard before Brazilians Willian and Oscar, and Spaniards Diego Costa and Cesc Fabregas earned the Londoners three Group G points.

The Israelis’ goalkeeper Predrag Rajkovic sent Willian tumbling in the box but Hazard blazed the sixth-minute penalty over the bar.

Rajkovic was having a terrible game and on the quarter-hour mark he allowed a Willian in-swinging free-kick, which was missed by everyone, to creep inside his far post.

On the stroke of half-time, a pair of Maccabi defenders combined to fell Spain forward Costa in the box and Oscar placed the spot-kick low to Rajkovic’s right.

Costa scored a stunning over-the-shoulder volley into the top corner from Fabregas’s pinpoint cross, and the latter then got his name on the scoresheet, tapping home the rebound after Rajkovic saved Loic Remy’s shot.

Thomas Mueller was a somewhat fortunate match-winner as Bayern Munich began their Group F campaign with a 3-0 success at Olympiakos in a match that was marred by crowd trouble before kick-off.

At least one Bayern fan was taken to hospital after Greek police attacked away supporters with batons in response to German taunts directed at the Olympiakos faithful.

Mueller, though, was a lucky goalscorer when his wildly mishit cross from the right looped over goalkeeper Roberto Gago and into the top corner.

Late on Mario Goetze scored a second from a tight angle and Mueller rounded off the scoring in injury time from the penalty spot.

Brazilian Hulk was the star as Zenit St Petersburg not only avoided defeat in Spain for the first time but came away from Valencia with a 3-2 win.

Hulk opened the scoring on nine minutes with a low cross shot before thrashing home a stunning second that was hit with such force from 25 yards, it went straight through Valencia goalkeeper Jaume’s hand.

But Axel Witsel cracked home the winner for the Russians on 76 minutes.

Bayer Leverkusen started their Group E campaign with a fine 4-1 victory over BATE Borisov with Haka Calhanoglu scoring a brace.

Javier Hernandez and Admir Mehmedi also found the net for the Germans while Nemanja Milunovic scored for the Belarussians.

Vincent Aboubakar scored a double for Porto but Vitaliy Buyalsky equalised a minute from time for Dynamo Kiev, who had opened the scoring through Oleg Gusev in a 2-2 draw in Ukraine.

Debutants Gent had goalkeeper Matz Sels to thank for saving a last-gasp Alexandre Lacazette penalty as the Belgians earned a 1-1 draw at home to Lyon.

Christophe Jallet opened the scoring in the Group H encounter before Danijel Milicevic equalised for Gent, who finished with nine men after the dismissals of Brecht Dejaegere and Thomas Foket.