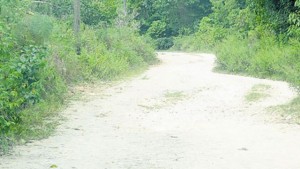 A section of the lonely road where the attack happened. (PHOTOS: RENAE DIXON)

The St Ann police were up to late yesterday searching for a man who viciously chopped a woman — who later died — and raped a schoolgirl near Barrett Hall, Golden Grove, in the parish on Tuesday.

Twenty-seven-year-old Mellissa Smith — a mother of five — was chopped all over her body, with one of her arms severed, by a man riding a bicycle. She succumbed to her injuries yesterday at St Ann’s Bay Hospital where she was taken for treatment.

Yesterday, there were conflicting accounts as to how the attack happened. Some residents said that the woman was attacked when she happened upon the man while he was in the act of raping the schoolgirl. Others said that the two were walking on the lonely stretch of road when they were surprised by the man.

But for Smith’s common-law husband, Paul McKenzie, whatever happened, he is now without a partner and left to single-handedly raise their five children — whose ages range from two to 10 years.

McKenzie said he received the news of his partner’s demise while he was at work. “Yesterday morning (Tuesday) when mi reach work mi get a phone call seh Mellisa get chop up on Bridge Road,” McKenzie said, explaining that he immediately rushed to St Ann’s Bay Hospital where she was taken.

“Pure blood mi see fi go up a theatre… when mi look on her a just her little mouth mi could see,” McKenzie said, noting that Mellissa’s face was heavily bandaged.

He said one doctor told him they were the worst chopping wounds he had seen in his years working at the hospital.

Residents, who had seen Smith on the scene before she was taken to hospital, said sections of her face were falling off and that one of her arms was severed.

McKenzie, meanwhile, said the doctors fought to save Smith’s life.

“Dem give her bout six bags of blood; she bleed it out back,” he told the Jamaica Observer. “We had a prayer meeting for her about 6 o’clock. When we left, we got a call that she gone.”

“Mi feel depressed and mi feel down. Mi have the children dem around me,” a distraught McKenzie added. “Mi just want that perpetrator fi bring to justice right now.”

“She gone, she leave we gone, boy,” McKenzie lamented. “I never want her to go, but the state that she was in, if she did come back out she would be a vegetable. God knows best.”

He said that Smith was an excellent farmer. “If you ever see her field how she work; she mek the country girl dem look like dem nah try,” he said, explaining that although Smith was originally from St Andrew, she was a dedicated farmer in their home community of Irons Mountain.

Meanwhile, the father of the schoolgirl who was raped said that the incident has left him a distraught man.

“Mi stress out over it, man. A mi only daughter; a mi first child,” he said, close to tears.

He said that he had advised his daughter against using the road, although it made the distance to the main road much shorter.

“Tru the place so lonely; nobody never even a come. Nobody nah walk a dem place deh more than so,” he lamented.

When the Observer spoke with the father yesterday, he disclosed that his daughter had gone to school because she wanted to complete her exams. However, the Observer later learned that the traumatised teen was allowed to sit out her remaining examinations.

Meanwhile, community members were left upset by the incident.

“One time nothing like dem deh nuh happen yah so enuh, but nowhere nuh safe again,” one resident said.

The St Ann police are probing the incident.