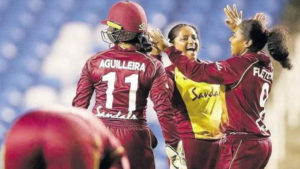 The 30-year-old Mohammed, the all-time leading T20 wicket-taker, grabbed the ninth hat-trick in women’s T20Is off the last three balls of the innings to help limit the Proteas to just 101 for eight in their 20 overs.

The Windies then made light work of their run chase, cruising to 102 for the loss of just one wicket, thanks mainly to an unbeaten 79-run second-wicket partnership between Natasha McClean and captain Stafanie Taylor.

But the spotlight belonged to Mohammed, who bamboozled the visitors with her mesmerising off breaks on her way to picking up five wickets.

Hayley Matthews had actually been the early destroyer, dismissing Lizelle Lee and Sune Luus for ducks to leave the visitors in early trouble at four for two.

Spirited responses from captain Dane Van Niekerk, who top-scored with 36, Chloe Tryon (21) and Mignon Du Preez, who made 27 led a brief fightback as they rallied the score up to 82 for three.

However it was Mohammed’s fourth over, and last of the innings, that turned the game on its heels, as she struck four times in five deliveries.

She accounted for Van Niekerk with the second ball of the over, before deceiving Marizanne Kapp with her spin to have her stumped by wicketkeeper Aguilleira for 14. Mohammed then bowled Saarah Smith and Masabata Klaas, both without troubling the scores.

Following the dismissal of Matthews for 17, the pair of McClean and Taylor carried the Windies to an easy victory.

Mclean finished unbeaten on 42 from 46 balls while Taylor scored 35 not out off just 30 balls, as Van Niekerk used seven bowlers in an attempt to find a breakthrough which ultimately never came.

The third game was slated for yesterday.

F Tunnicliffe not out 0

N McClean not out 42

Player of the Match: Anisa Mohammed