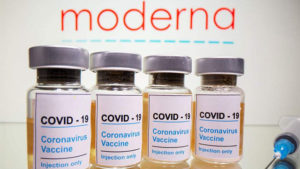 Biotechnology firm Moderna announced Monday that a preliminary analysis shows its experimental coronavirus vaccine is nearly 95 percent effective at preventing illness, including severe cases — a striking initial result that raises the prospect that the United States could have two coronavirus vaccines available on a limited basis by the end of the year.

The news comes a week after pharmaceutical giant Pfizer and its German partner BioNTech lifted the stock market and people’s hopes with the news that their coronavirus vaccine was more than 90 percent effective. The announcement sent stocks up again, with the Dow Jones industrial average and the S&P 500 closing at record highs. Moderna’s share price rose more than 9 percent.

The resoundingly similar results from two vaccine candidates were even more exciting to some scientists than last week’s news — suggesting that the surprising results from Pfizer’s vaccine were not a one-off and that the general approach being used by multiple vaccine efforts was the right one.

“I was so excited last week, but then a little bit nervous because I knew Moderna was coming behind,” said Kathleen Neuzil, director of the Center for Vaccine Development at the University of Maryland School of Medicine. “This just seals the deal for me. … This [result] has been duplicated and satisfied the scientific principle that it is real.”

But even if the two vaccines receive a regulatory greenlight in coming weeks and the first shots become available in December, they will be limited. There will be enough of both vaccines to vaccinate 20 million people that month — with more becoming available in 2021 as production ramps up and other vaccine candidates may prove successful.

People who are not in a high-risk group, such as essential workers, older people and those with underlying conditions, are not likely to start having access to shots until April — and that phase of the effort will take months. Distributing the vaccine will be a formidable proposition, requiring elaborate coordination among the federal government, states, pharmaceutical companies and health-care providers.

“We should not let the accomplishment of an effective vaccine have us feel we can let our guard down. In fact, it should be an incentive to double down,” Anthony S. Fauci, director of the National Institute of Allergy and Infectious Diseases, said at a briefing. “We ultimately have the synergy between a vaccine and the public health measures, which will get us out of this very difficult situation we’re in.”

Tedros Adhanom Ghebreyesus, director general of the World Health Organization, echoed those concerns at a briefing.

“This is not the time for complacency,” Tedros said. “While we continue to receive encouraging news about covid-19 vaccines and remain cautiously optimistic about the potential for new tools to start to arrive in the coming months, right now we’re extremely concerned by the surging cases we are seeing in some countries.”

Moderna’s two-dose vaccine, co-developed with Fauci’s institute, is being tested in 30,000 people. Half received two doses of the vaccine, and half received a placebo. To test how well the vaccine works, physicians closely monitored symptomatic cases of covid-19, the disease caused by the virus, to see whether they predominantly occurred in people who received the placebo.

Of the 95 cases of covid-19, 90 were in the group that received the placebo. There were 11 severe cases reported — all in people who received the placebo. With cases of covid-19 confined almost exclusively to trial participants receiving a placebo, that sends a strong signal that the vaccine is effective at thwarting the virus — results that surpassed the expectations of many experts.

“I describe myself as a realist, but I’m fundamentally a cautious optimist,” Fauci said in an interview. “I felt we’d likely get something less than this. … I said certainly a 90-plus-percent effective vaccine is possible, but I wasn’t counting on it.”

The best pediatric vaccines, such as the one for measles, are more than 90 percent effective. The Food and Drug Administration had set the bar much lower for a coronavirus shot, issuing guidelines that a vaccine would need to show at least 50 percent efficacy.

The data have not yet been published or peer reviewed, and the results may change as the study continues. But Fauci said the data effectively answers a question that has lingered: whether a vaccine measured by its success in preventing any case of covid-19 can prevent the most urgent cases, too.

An independent data committee, convened by the National Institutes of Health, analyzed the results Sunday morning. Stéphane Bancel, chief executive of Moderna, said in an interview that he spent the morning trying to distract himself from wondering about the results by working at his home in Boston. Instead, he found himself constantly checking his phone and email. When he learned the results later in the morning, the evidence that the vaccine prevented severe disease stood out as most consequential.

Many questions about details remain. How long will the protection last? Will results be similar across all subgroups? Does the vaccine decrease the infectiousness of the virus in people without symptoms?

But the early successes show the power and speed of a new vaccine technology never before used in an approved medical product. Both the Moderna and Pfizer vaccines deliver a strip of genetic material called messenger RNA to teach the body to defend against the virus. The messenger RNA carries the blueprint for the distinctive spike protein that dots the outside of the coronavirus, instructions that the body’s cells follow to build the spike protein.

“It is extremely encouraging,” said Stanley Plotkin, inventor of the rubella vaccine. “This and the earlier result show that the platform really works, and this bodes very well for other diseases, where this platform could be used — and considering the speed with which the platform was put into operation, it’s an excellent result.”

Moderna has committed to completing its trial before applying for emergency-use authorization — which means waiting until there are 151 cases of covid-19 in the study. A previous projection showed that the trial might end early next year, but it is instead expected to reach its endpoint in seven to 10 days, Bancel said, because of surging coronavirus cases in the United States. The explosion of virus cases translates into an expedited ability to ascertain whether a vaccine works.

The company will have enough safety data to support an application shortly before Thanksgiving. Bancel anticipates that if a vaccine is cleared by regulators, the first doses could become available to those at high risk in the second half of December.

Unlike Pfizer, which invested $2 billion of its own money in researching and developing a vaccine, Moderna is part of Operation Warp Speed, the government initiative designed to erase the financial risk of vaccine and therapeutics development by providing upfront funding to companies and helping coordinate the trials. Moderna received nearly $1 billion from the U.S. government to support research and development. The companies both have contracts to sell 100 million doses to the U.S. government.

The side effects of Moderna’s vaccine were mostly mild or moderate, including pain at the injection site, fatigue, headache and muscle pain, according to the company’s news release.

Regulators at the FDA must review the evidence for the Moderna and Pfizer vaccines, but the robust early indication of success suggests both vaccines might become available to high-risk populations before the end of this year. That would start a gradual process of inoculating the entire population — one that government officials predicted meant that high-risk groups of people would be vaccinated over the first few months of the year, with vaccine becoming more widely available to healthy, younger adults starting in April.

The two successes could have ripple effects that influence the ongoing trials and on future coronavirus vaccine studies. People currently participating in the Moderna and Pfizer trials do not know whether they received the real vaccine or placebo, and at some point, those who received a placebo may be crossed over to receive the real thing. But the decision to do that will mean a loss of valuable data.

“Given these products will be given to potentially billions of people, you have to be careful to make sure they’re safe and effective, and there’s no easy way around that issue,” said Ira Longini, a biostatistics expert at the University of Florida, who said a year of follow-up on participants would be ideal.

The focus on vaccines will soon shift to the daunting logistics of manufacturing and distribution.

The Pfizer vaccine requires ultracold storage conditions — minus-70 degrees Celsius — not widely available in typical vaccination settings. The company has been working to overcome that limitation.

Moderna announced Monday that its vaccine can be stable at refrigerator temperatures for a month and frozen for up to six months. It will not require dilution at the point of care, unlike the Pfizer vaccine. That could mean that the vaccines are distributed to different kinds of locations, with the Moderna vaccine better suited for rural areas or places without specialized freezers, according to Matthew Hepburn, the vaccine leader for Operation Warp Speed.