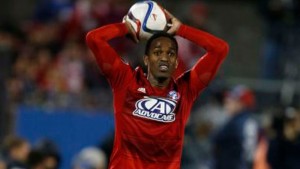 The St. Kitts and Nevis Football Association have announced their squad ahead of the two legged Round 1 World Cup qualifiers against Turks and Caicos Islands.

The Sugar Boyz will play at home Tonight Monday 23rd at Warner Park before travelling to the TCIFA National Academy in Providenciales, Caicos Islands.

Major League Soccer Star Atiba Harris is expected to once again lead the team which will again feature a plethora of overseas players .

Roughly ten players are expected to make the journey to Basseterre to ensure Team SKN go up one game in the two game series against the Turks and Caicos. Predominant among the overseas based players is Romaine Sawyers who is considered the best player on the team.

Sawyers, who began his career with the English Team West Brom and now plays for Walsall has also attracted interest from the Championship with Middlesbrough, Nottingham Forest, Huddersfield and Birmingham City all following him closely in the British League ONE.

Another English Player Ryan Robbins is set to make his International Debut with Team SKN . The English League Stamford AFC striker Robbins qualifies for the team through his grandfather and his cousin Harry Panayiotou who is already an international for the Team SKN.

Other notables in the squad are Tishan Hanley who played for the local Garden Hotspurs before moving to the US where he now plays for the Richmond Kickers in the US Pro League. And Gerard “Baby” Williams who is the captain of the W Connection in the TT Pro League in Trinidad.

St. Kitts-Nevis best performance in World Cup Qualifying was reaching the semi-final round of the qualifiers during the 2006 campaign.