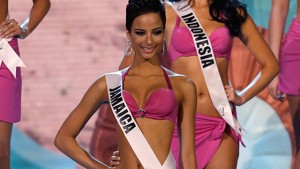 MANILA, Philippines – Is Miss Jamaica Kaci Fennell half-Filipina?
Social media is abuzz that Fennell, who represented Jamaica in the 63rd Miss Universe pageant on Sunday (Monday morning, Manila time), is of Filipino descent.
In a column published on Tuesday. STAR entertainment editor Ricky Lo quoted an item online, which claims the Jamaican beauty queen’s mother is Filipina.
The report goes: “Here’s an interesting item about Miss Jamaica Kaci Fennell who finished fourth runner-up to newly-crowned Miss Universe Pauline Vega Dieppa, culled from the Internet:
“Kaci Fennell is a model and student from Kingston, Jamaica. She won the Jamaica’s Next Top Model contest where she had been the Judges’ favorite to win owing to her exotic mixed racial features. She has Jamaican, African and Filipino roots. After winning the title, she said in an interview that she owes her success to her mother’s support. “I still can’t believe, I have finally won (the contest). I am really thankful to my mother. She had always supported me and guided me through out the contest, she was herself a beauty pageant contestant in her home country the Philippines. She had instilled her Filipino values in me and told me to always be humble, I guess that’s what helped me win.”
The report has also been picked up by other news outfits.
But Fennell addressed the issue six months ago in a post on her Instagram account.
In one of her Instagram posts, one of her followers asked about claims that her mother is Filipina, which was written on the Wikipedia page about her.
Fennell answered: “Thanks for bringing that to my attention. But I am a born and bred Jamaican with French, Indian, English and black roots. Both my parents are Jamaican as well.”
Miss Jamaica became a top trending topic on Twitter in the Philippines after the Philippines’ Mary Jean Lastimosa failed to enter the finals of the 63rd Miss Universe.
Miss Colombia Paulina Vega was named the new Miss Universe, with Miss USA Nia Sanchez as first runner-up.