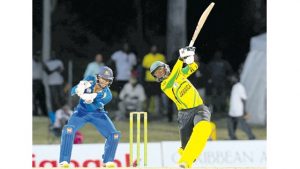 Nikita Miller, the Jamaica Scorpions captain, has defended his team’s tactics after they went down by 59 runs to Barbados Pride at Coolidge Cricket Ground in Saturday’s final of the Regional Super50 tournament.

The Pride, powered by Shai Hope’s brilliant 101 and Captain Jason Holder’s swashbuckling 69, piled up a competitive 271-9 in the 50-over-a-side day/night encounter.

Chasing 272, the Scorpions teetered at one stage at 122-7, but a late assault by all-rounder Rovman Powell, who cracked a back-to-the-wall 65, gave the Pride nervous moments near the end with several lusty blows. No other Scorpions batsman passed 30 in a score of 212 all out.

Some questioned why medium pacer Powell, who starred with a five-wicket haul against Trinidad and Tobago Red Force in the semi-finals, was only introduced into the attack in the 46th over of the Pride innings.

By then, Hope and Holder were well on their way to a stunning, 127-run sixth-wicket stand that swung the game in the Pride’s favour.

“I’m a captain who works with the situation. I don’t play what you did the day before,” Miller, who had high praise for the team effort throughout the tournament, told the Jamaica Observer in an interview yesterday.

“If you’re playing against the same team and if you’re playing on the same pitch, yes. But on the type of pitch we were playing on, and at that time, the spinners were tying down the batters and Rovman is more adept at bowling at the latter stage or at the death [near the end of the innings],” the Scorpions skipper continued.

The impactful Powell dismissed Holder at the end of the 48th over, and was also responsible for Hope’s demise when he executed a run out off his own bowling. Powell snared 2-27 off three overs, while part-time off-spinner John Campbell, who was key in bogging down the Pride in the middle overs, captured 2-35 off 10.

Rookie off-spinner Damani Sewell went for a creditable 1-40 off 10 overs.

Experienced pacer, Jerome Taylor felt the brunt of the Hope and Holder onslaught and went wicketless for 50 runs off six overs.

“As we saw… his [Powell’s] cleverness showed. I know he got five wickets [in the semis], but it’s a different situation. Yes his confidence was up, but we were playing a different team and Barbados is a team who don’t do particularly well against off-spinners, as we saw with the two off-spinners bowling in tandem,” Miller explained.

In the semi-finals, Powell — promoted to bat at number four after the top-order laid an excellent platform — blasted a sensational 45-ball 95 that helped the team to a record 434-4.

The Scorpions skipper told the Observer that Powell batting at eight on Saturday, instead of earlier in the innings, proved in vain mostly because the batsmen before him failed to lay the foundation for him to close out the run chase.

“With him batting at eight we wanted, as a team, to hold him back a little bit to give us what he is capable of. We didn’t want to expose him to so much spin. He is more comfortable playing the fast bowlers and with the damage he can create in the latter stages. His type of play is [based on] power and people don’t normally power hit for long,” Miller said.

“The score [runs required] was going down and with his power I think he could have done some damage. And if the platform was set I believe that he would have done the job. He did well and I believe it was his best innings of the tournament, and it’s unfortunate he didn’t come out in a winning way,” Miller added.

The Pride’s slow, left-arm orthodox bowler Sulieman Benn was the chief destroyer with 3-33 off 10 overs.