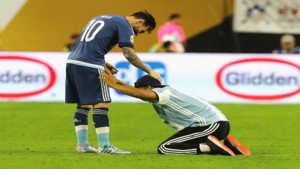 HOUSTON, USA (AFP) — Lionel Messi’s goal-scoring exploits at the Copa America Centenario have rewritten his country’s record books and left Argentina on the brink of their first major title for 23 years.

But if Argentina are to avoid a fourth straight defeat in a major final when they take the field in New Jersey on Sunday, the chances are they will have to do something they have never done before in the Messi era: score.

In three finals dating back to the climax of the 2007 Copa America, when Messi lined up in an Argentina side that was beaten 3-0 by Brazil in Venezuela, the Albiceleste have failed to find the back of the net. Another shutout followed in the 2014 World Cup final, which ended in a 1-0 loss to Germany, before an agonising defeat on penalties to Chile in last year’s Copa America following a 0-0 draw.

All the signs, however, suggest that Argentina’s barren goal-scoring spell — and long wait for a title — could come to an end at the MetLife Stadium this weekend, where Argentina will face either Colombia or Chile.
Tuesday’s 4-0 semi-final drubbing of the United States took Argentina’s tournament goal tally to 18 in five matches, or 3.6 goals per game.

While Messi grabbed the headlines for his magnificent free kick that saw him become his country’s record scorer with 55 goals, one clear of Gabriel Batistuta, Argentina’s goals have come from all angles.

“We’ve been playing well from day one and we deserve to be in the final,” Messi said Tuesday, dedicating his goals tally to the work of his teammates. “I’m happy to have the record, and I’m happy to play with teammates that have made it possible. I owe it to them,” the five-time world player of the year added.

A tournament that could prove to be Messi’s crowning glory has followed a troubled build-up dominated by injury and the distraction of his trial in Barcelona for tax fraud. He arrived in the United States late, still troubled by a back injury sustained during a friendly win over Honduras last month, and was forced to sit out Argentina’s opening game against Chile.

If that wasn’t bad enough, Diego Maradona cast doubt on Messi’s ability to captain Argentina soon after the tournament got under way, complaining to reporters at an event in Paris, “He has no personality.”

“He doesn’t have the character to be a leader,” Maradona complained. Messi responded to that verbal salvo with a sublime cameo against Panama a few days later, entering as a second-half substitute and scoring a brilliant hat-trick inside 19 minutes.

Since then, he has been close to his impish best, scoring a wonderful curling, dipping free kick against the USA on Tuesday while creating goals for Ezequiel Lavezzi and Gonzalo Higuain.

He even found time to autograph the jersey of a fan who sprinted onto the pitch at half-time in Houston, smiling and hugging the interloper who was subsequently escorted from the stadium by security guards.

The only note of caution for Argentina fans is that the team has been down this road before. Last year, Messi was superb as Argentina demolished Paraguay 6-1 in the semi-finals of the Copa America with the best attacking display of the tournament.

Neverthless, the upbeat mood in the Argentine camp is a far cry from the sense of despondency that enveloped Messi and his teammates after last year’s Copa America heartache. He was named player of the tournament in Chile but reportedly refused to accept the award, disgusted by yet another loss in a major final.

Messi now believes Argentina have emerged stronger from the setbacks. “You learn from everything,” Messi said. “It has been almost a year since the last Copa America and I think that made us stronger as a group, and as a team.

“We grew a lot, in lots of ways, and even though we didn’t win, it helped us.”